Efficiency was a theme as Australia’s junior teams made impressive starts on the first full day of play at the Junior Davis and Fed Cup by BNP Paribas Asia/Oceania Final Qualifying event in Bendigo. 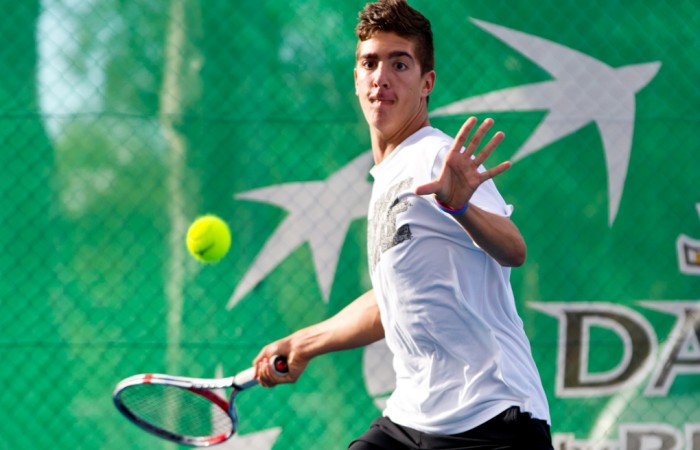 Efficiency was a theme as Australia’s junior teams made impressive starts on the first full day of play at the Junior Davis and Fed Cup by BNP Paribas Asia-Oceania Final Qualifying event in Bendigo on Wednesday.

The boys completed a 3-0 sweep over Kazakhstan and the girls overcame Singapore by the same score before each team took leads in their uncompleted ties against New Zealand and Malaysia.

In cold and at times windy conditions in Bendigo, Li Tu was especially convincing as he defeated Kazakhstan’s Alexander Kim 6-0 6-0, while Thanasi Kokkinakis allowed Roman Khassanov just one game more as he followed with a 6-1 6-0 victory.  Li then teamed with Daniel Guccione to defeat Kim and Zhansultan Chembotayev 6-2 6-0 in the doubles.

“It’s a little surprising for the boys, I think, to win as easily as they did against Kazakhstan. I think that builds their confidence,” said junior Davis Cup captain Mark Woodforde. “The quality, they were just both able to keep their foot on the accelerator and were to create some distance from their opponents … thanks to Li for getting us off to a good start, that’s a big plus.”

“She needed to do something and the good thing is that she did. She started to get a little bit more margin on the ball and not making as many errors and then wins the match,” said Junior Fed Cup team captain Nicole Pratt, who is also Bains’s individual coach.

Leads were also established in ties that will be completed on Thursday morning. In the Junior Davis Cup, Li dropped just a single game in overcoming New Zealander Kyle Butters, while Kokkinakis leads Alex Kintcharov 6-1.

After the conclusion of that tie, Australia will take on China on Thursday. With all three team members recording singles victories today, Pratt is pleased with the opportunities available in the Junior Fed Cup team.

“Even though Naiktha is the higher ranked player I want to put the best team in on the day. The fact that we can maybe hopefully save a couple of players and rest, it’s definitely of benefit,” she said.

Woodforde hinted that having made a winning start in doubles, Victoria’s Daniel Guccione might also expect to take to the court for singles when Australia meets Philippines in their third round-robin tie on Thursday.

Play resumes at the Bendigo Tennis Association at 9 am Thursday 26 April.