Pulling on the green and gold tracksuit is an inspiration all of its own, but for the players representing Australia at the Junior Davis and Fed Cup this week there’s been an extra boost. 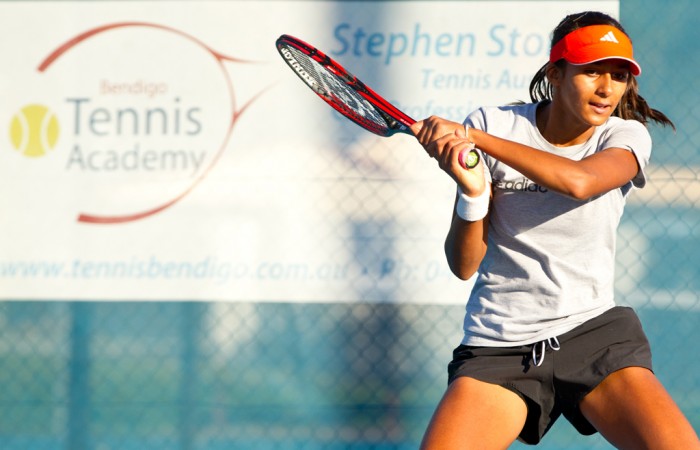 Pulling on the green and gold tracksuit is an inspiration all of its own, but for the players representing Australia at the Junior Davis and Fed Cup by BNP Paribas Asia-Oceania Final qualifying event this week, there’s been an extra boost provided by the success of Australia’s senior Fed Cup team in defeating Germany to return to the World Group.

“I just think it’s so important with the young kids to have that ignition, to want to get to the very top. It’s unique having a team environment and they’re so excited. It’s actually really refreshing for me to see just how excited they are.”

“Even at junior level, the same as if they’re playing at senior level. Nine times out of 10 you’re playing for yourself,” Woodforde said. “This week is about supporting each other. It’s not easy. Six matches in six or seven days, singles and doubles – the value of having three guys that you can put anyone in, I want to explore that.”

For many players, the intense week of competition at the Bendigo Tennis Association will form some of the most valuable experience of their still-young careers.  Sixteen teams from the Asia-Oceania region compete in a round-robin knockout basis over six days and the four teams that progress to the semifinals will qualify for the Junior Davis Cup and Fed Cup World Finals in Barcelona, Spain, in September.

Individual achievements have added to the credentials of Australia’s top young players. Naiktha Bains, who is just 14 years old, won the Optus 14s National Grasscourt and Optus 16s National Claycourt championships in 2011 and solid results in Asia saw her junior ranking improve from 329 to 200 since December.

Wallace, who is 15, claimed the 2012 Optus 16s National Claycourt championships and was a semifinalist at the Queensland Junior Claycourt International.

Hives, 15, had a breakout week in claiming her first ITF junior title at the Queensland Junior Claycourt International in Bundaberg.

Guccione, who is 16, has almost halved his ITF junior ranking from just outside 300 to 164 since December last year. Kokkinakis, also 16, has achieved solid results on Australia’s Pro Tour circuit and was an Orange Boy at Australia’s Davis Cup tie in Brisbane against Korea earlier this month.  Tu, the youngest player in the junior Davis Cup team at 15, is driven by a goal to compete in the senior Australian Davis Cup team.

Australian teams have set a high standard in recent years, achieving victory in the Junior Davis Cup in 2009 and the Junior Fed Cup in 2011. The prospect of replicating those results creates both inspiration and expectation but Pratt notes there’s also power in a fresh start to the 2012 campaign.

“I spoke to the girls about that. I just felt like they shouldn’t feel that there’s any pressure because it’s a totally different team.  It’s another year,” she said.