Box Hill Secondary College has unveiled a plaque commemorating its Australian Tennis Award for having the most outstanding tennis school in 2011. 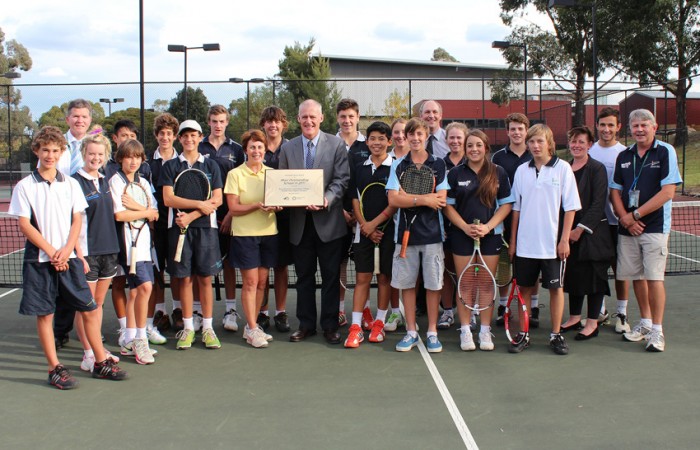 The Middle Years Tennis School at Box Hill Secondary College has unveiled a plaque commemorating their Australian Tennis Award for ‘Most Outstanding School’ in 2011.

The school defeated two other finalists in Griffith East Pubic School (NSW) and the Yarra Valley Grammar School (VIC) at the annual Australian Tennis Awards at the end of last year to win the prestigious award.

When asked what made their school stand out from the other finalists, the school’s Director of Tennis Phillip Whelan said it was a combination of factors including “the blend of tennis and the academic program, as well as the preparation of the tennis staff and the ability to work in unison with the academic program.”

The award recognises that the Middle Years Tennis School has aligned with a Tennis Australia qualified coach, has a dedicated staff member assigned to teams, and has strong links with the local club, coach and incorporated tennis into their curriculum.

Along with the recognition the award brings, the school also received $5000 to help introduce primary and secondary students to tennis and establish links to their local club and coach.

There were a number of other awards handed out at the Australian Tennis Awards, including the premier award, the John Newcombe Medal, which was awarded to Samantha Stosur.

“I feel very honoured to receive the Newcombe Medal for a second year in a row particularly with all the talent we had in the room tonight,” Stosur said.

“The Newcombe Medal is a great initiative and a very special occasion for the whole Australian Tennis community to celebrate our sport.”