Bernard Tomic fell in the second round at the Monte Carlo Masters on a day the world's top two men, Novak Djokovic and Rafael Nadal, progressed with ease. 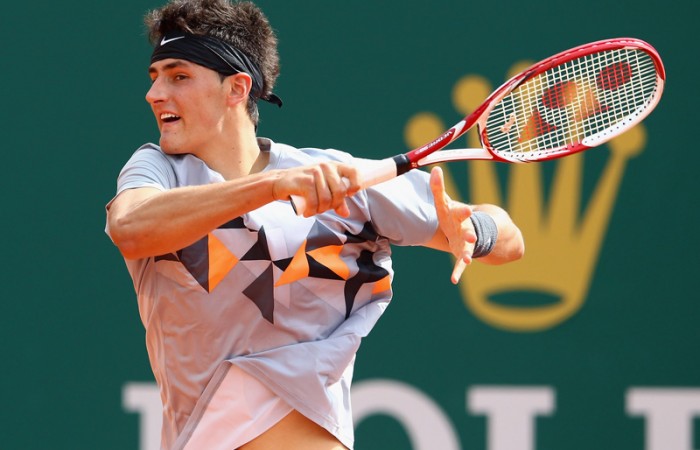 Bernard Tomic has been unable to repeat his Australian Open success over No.16 Alexandr Dolgopolov, falling in three sets to the Ukrainian in the second round of the ATP Masters event in Monte Carlo.

Dolgopolov handed new Monte Carlo resident Tomic a 6-2 5-7 6-1 defeat, gaining revenge for his five-set loss to the Australian in the third round at Melbourne Park in January.

Dolgopolov will next face world No.1 Novak Djokovic, who came through his opening match in straight sets against Italian Andreas Seppi on a cloudy day on the Mediterranean coast.

“He’s a very talented player, comes up with some shots that are not really typical,” said Djokovic of Dolgopolov.

“He changes the pace and is very dangerous on clay. I need to be aware and disciplined on the court. I need to try not to be frustrated with the rhythm that he comes up with.”

Djokovic began his Monte Carlo campaign with a 6-1 6-4 victory over Seppi, taking a 5-0 lead over the 44th-ranked Italian and breaking for an early lead in the second set on the way to his seventh win in their series of encounters.

“I served really well when I needed to,” said Djokovic. “That’s encouraging for the clay, it’s good to have a couple of free points there.

“I was really focused first set and played it well against a tough, quality opponent who plays good on clay. For the first official match since Roland Garros last year, it was satisfying.”

Rafael Nadal emerged a 6-4 6-3 winner over Jarkko Nieminen with no obvious discomfort to his troublesome left knee as the Spaniard began his quest for a record eighth title at the Monte Carlo Masters.

Nadal, now 40-1 at the venue where he lost his only match in 2003, won his 38th straight match in the principality as he overcame stubborn resistance from the 48th-ranked Finn, who claimed the Sydney title in January.

Nadal, who required two weeks of knee treatment after failing to play his Miami semi-final match due to knee pain last month, has not lifted a trophy since the French Open 10 months ago.

“I played a really normal match, nothing special – nothing very bad, but nothing very good,” said Nadal, who faces Kazakh qualifier Mikhail Kukushkin on Thursday.

“The important thing was that I won in straight sets. Tomorrow I have another chance to keep improving, and that’s what I’m going to try.

“You need days to see how all the sensations improve – the knees, the tennis, everything. When you stop for 15 days without practice, your body loses a little bit of the performance.”

There was a shock for fifth seed David Ferrer as the Spaniard went down to Thomaz Bellucci of Brazil 6-3 6-2.

Julien Benneteau registered another French win as he put out 2011 semi-finalist and 15th seed Jurgen Melzer of Austria 6-4, 6-3. Benneteau tackles British third seed Andy Murray in the next round.