The dream of breaking back into the Davis Cup World Group is very much alive for Australia with one tie to go. 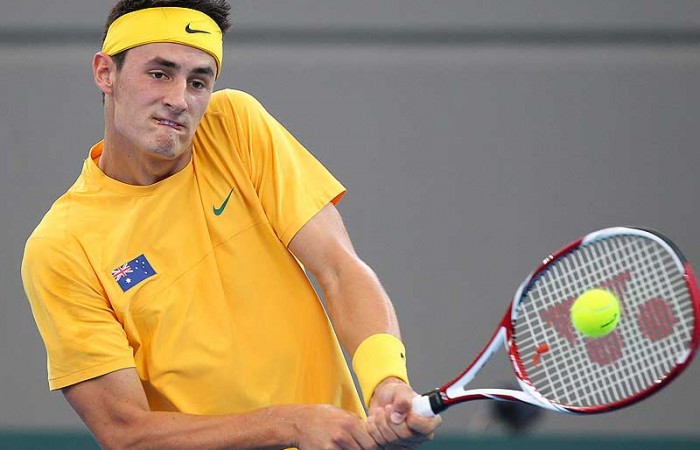 The dream of breaking back into the Davis Cup World Group is very much alive for Australia with one tie to go but spearhead Bernard Tomic also has big personal goals for the next few months.

World No.36 Tomic helped Australia grab a 5-0 sweep against a plucky but over-matched South Korea in Brisbane on Sunday to book a World Group playoff in September.

With victory already secured, Wimbledon quarter-finalist Tomic showed none of the early nerves of his opening singles clash on Friday to brush aside Cup debutant Jung-Woong Na 6-2 6-1 in less than an hour on Sunday.

In contrast, Marinko Matosevic became the first Australian singles player at the tie to drop a set before outlasting Min-Hyeok Cho 6-2 2-6 6-0 in the other dead rubber.

Tomic, 19, looked forward to helping Australia return to the elite 16-team World Group for the first time since 2007.

But not before launching a gameplan that could catapult him into tennis’ elite.

Tomic will fly out on Tuesday to begin a two-month assault on clay in Europe in a bid to secure a seeding at the French Open starting on May 27.

Then there’s the year’s “two biggest things” – Wimbledon and the Olympics – and what he hopes is a further big rise through the rankings.

The lanky teenager will even keep in contact with the sports psychologist welcomed into the Cup team camp in Brisbane – Phil Jauncey – to keep his “head straight” during his quest.

“Every great sportsmen whether it is Federer or Nadal, they have areas where they can improve and I need to improve to become stronger mentally on the court,” Tomic said.

“The biggest problem with me is, now that I am coming up I have to play a lot of lower-ranked players (I’m expected to beat).

“Look at Federer and Nadal, it would be very difficult for them always playing guys that are in the top 100.

“Sometimes it can be, not boring, but you have to have your head straight so I have been working hard with him (Jauncey).

“I have got his details so I will continue to speak to him, and hopefully his thoughts can help me hit the clay a lot better.”

Tomic grabbed attention when he reached Wimbledon’s quarter-finals as a qualifier last year.

Now Tomic wants to soar higher – starting with a run at Roland Garros.

“I can play on clay if I am in the right mindset,” Tomic said.

“I don’t move as good as the other players, so when I am down a set and a break it is tough for me to come back.

“I have to work on developing my game in the next few weeks against these players … (if I want) to get to the semis in the French.”

The World Group playoff draw will be held next week.

Australia will find out if they are drawn against Canada, Italy (both at home), Switzerland, Germany, Russia, Sweden, Japan (all away) or Kazakhstan (host decided by coin toss).

“Hopefully we draw the right team, and not (Federer’s) Switzerland over there on clay,” Tomic said.