Stosur takes out Venus at Charleston

Sam Stosur defeated Venus Williams 6-3 4-6 6-3 in the quarterfinals on Friday at the WTA event in Charleston, and will next face sister Serena in the semifinals. 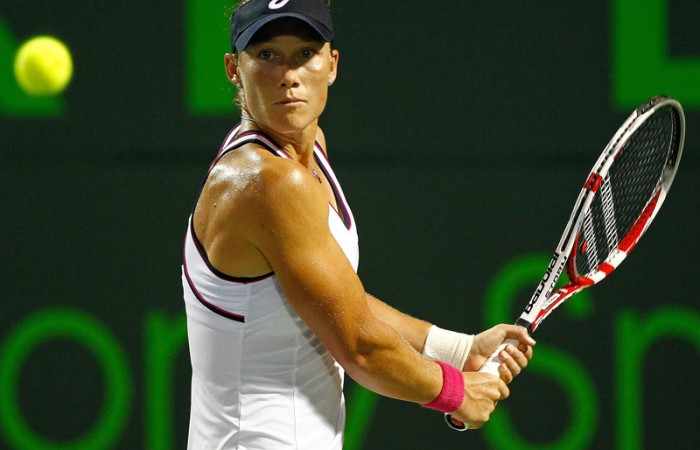 Australia’s Samantha Stosur booked her semifinal spot at the WTA Charleston clay court event with a pair of three-set wins on Friday, ruining the prospect of an all-Williams clash.

Stosur, who turned 28 last Friday, ousted world No.87 Venus Williams with a 6-3 4-6 6-3 win in the quarterfinals to set up a semifinal showdown against Serena Williams.

Stosur, of the Gold Coast, was leading Galina Voskoboeva 4-2 in the first set on Thursday when the match was halted because of rain.

First up on Friday on centre court, No.2 seed Stosur finished off Voskoboeva with a 6-3 4-6 6-2 third-round win. She was back on court less than two hours later to face Venus.

“I don’t think it was the end of the world to get out there and play this morning,” Stosur said.

“Today was very different than what we’ve been playing in, so it was good to get used to the conditions. I would have preferred not to play two three-set matches, but nevertheless, I’m happy to be through.”

Serena reached the semifinals on Friday when injury-cursed Sabine Lisicki quit their last-eight clash in floods of tears.

The American fifth seed was 5-1 ahead in the first set when Lisicki – whose career went into a tailspin in 2010 when an injury left her barely able to walk – retired after falling and hurting her ankle.

Stosur posted her first career win over Venus after losing four straight – all in straight sets, including three on clay.

“It’s only one win compared to I don’t know how many times she’s beaten me, five or six, but of course I’m very, very happy to have beaten Venus now,” Stosur said.

“It’s always a good challenge coming up against the players you’ve never beaten, and I’ve always struggled against her game, but thankfully I was able to turn it around.”

Seven-time grand slam winner Venus, who was playing on a wild card invitation, made five double faults and won just 42 per cent of her second-serve points. The 31-year-old Venus is trying to rebuild a ranking dented by a lengthy injury and illness layoff.