Preparing for the pressure

Two days out from the Asia–Oceania zone one round two tie between Australia and Korea, the nerves are building. 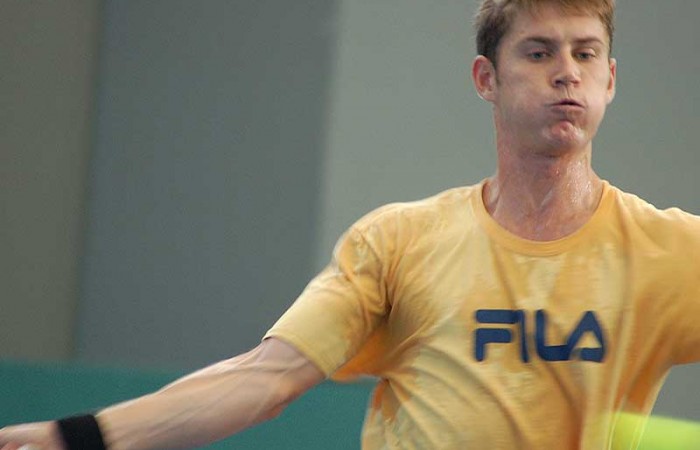 Two days out from the Asia–Oceania zone one round two tie between Australia and Korea, the nerves are building.  Australian captain Pat Rafter can sense it as his men – and lads – strike out on the centre court named after him at the Queensland Tennis Centre.

“They are starting to feel the nerves a little bit, which is good,” he notes after the second Australian practice session where No.2 ranked Matt Ebden has been playing points against young hitting partner Ben Mitchell, No.1 Bernard Tomic trading blows with No.3-ranked Aussie Marinko Matosevic and Chris Guccione partnering Matosevic against Mitchell and former doubles great Todd Woodbridge.

Rafter knows all about Davis Cup nerves, having represented his country in two Davis Cup finals – 2001 v France and 2000 v Spain – both tight, tense affairs that ended in crushing 3-2 losses for the Australian side.

“Some people deal with the Davis Cup pressure different than others. I certainly didn’t but Matt [Ebden] probably will,” says Rafter.

In Geelong several months ago, Ebden made his Davis Cup debut in a dead fifth rubber, winning convincingly in straight sets against his equally green Chinese opponent. At the time, he likened the tension-barometer as not dissimilar to a regular Tour match. Should he play in singles this Friday on the opening play against Korea, Rafter says the tension could escalate.

“He played a dead rubber, which is completely different to a live rubber.  I expect him to have a few more nerves. We’ll wait and see how he does deal with it. This is a good opportunity for him to get a win in a live rubber. These guys [the Koreans] are not recognised in the rankings, but Davis Cup people play a lot better than their rankings suggest, in fact I know they will.”

In his fourth tie as captain, Rafter is keen for this relatively new line-up of Aussie Davis Cup players to get experience representing their country, and deal with the sharp pressure that comes with the task.  Because, should they succeed this weekend, the pressure will intensify at the September play-offs – the final challenge for a berth in next year’s coveted World Group.

Rafter is also seeking to continue his mission of building a strong team environment that balances hard work and fun.

“A lot of hard work, but with hard work comes relaxation and enjoyment,” he says. “Every night the guys get together at dinner, have fun, in a real sort of blokey team atmosphere and you don’t get that on tour, it’s really unique.”

Adding to the hard work ethic and team spirit is the presence of Lleyton Hewitt, who elected to add his support, motivation and advice this week as he sits out the tie following toe surgery.

Rafter is delighted. “He wanted to come. It’s brilliant, I’m so glad he’s here,” he says. “He’s offering advice out there, too, and it’s great for me to get to listen to him. The guys look for him on the sidelines. He’s passionate when you’re playing a match, it’s good to look for those passionate people and he’s one who will jump up and down and show a bit of mongrel. It’s important we harness that.”

Get your Davis Cup tickets.

Singles starts at 1pm on 6 April followed by doubles on Saturday 7 April and the reverse singles on 8 April.