With his win over Juan Monaco, Novak Djokovic has set up a rematch of the 2009 Miami final against Andy Murray, who advanced after Rafael Nadal withdrew. 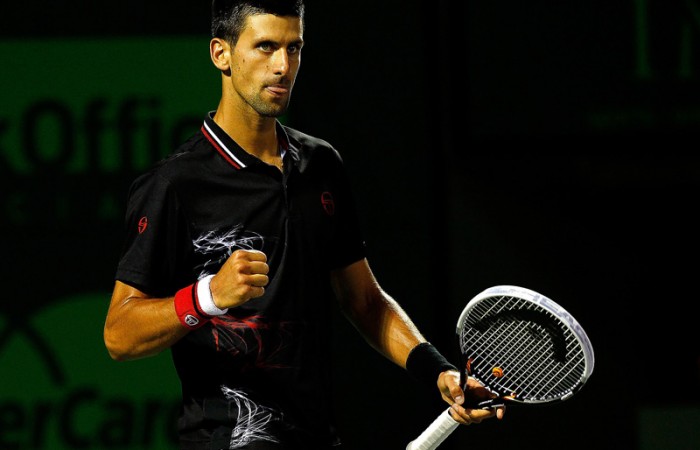 Murray, who got the better of Djokovic in the 2009 title match, reached the final on a walkover when world No.2 Rafael Nadal pulled out of their semifinal with a sore left knee.

World No.1 Djokovic breezed through his first set in just 27 minutes and appeared to be cruising to a victory when Monaco got hot in a marathon second set which lasted one hour, 36 minutes.

It marked the second day in a row Djokovic struggled to finish off an opponent and needed a tiebreaker to clinch it.

In the quarterfinals against fifth seed David Ferrer, Djokovic easily won the first set 6-2 but then stumbled down the stretch before before winning 7-6(1) in the second set.

“As I did yesterday in the quarterfinals, I started very strong, just going for the shots, being very aggressive, then I just wasn’t able to close it out,” Djokovic said. “It was a very similar match to the one against Ferrer.

“All the credit to him (Monaco) for staying in the match, fighting and coming back.

“I still think I gave him points. I made so many unforced errors that I got him back into the match.

“It was semifinals. It was never going to be easy. I didn’t expect an easy match and I am just happy to be through.”

Djokovic is in his fourth Miami final and chasing a third title here. He also won in 2007.

“We all know his talent, his potential, and quality,” Djokovic said of Murray.

“He’s dangerous on any surface. Obviously we played the finals in 2009. I lost in straight sets. He likes the conditions. He likes to play in the heat, as well, and has a good serve.”

Djokovic, who reached his first final since winning the Australian Open in January, finished with two aces and four double faults against Monaco, stretching his perfect record over the Argentinian to 5-0.

Djokovic got off to a flying start, winning all six games in the opening set and clinching it with a cross-court forehand to the open court.

He won 71 per cent of his second-serve points compared to just 13 per cent for Monaco, who won just eight points the first set.

But Monaco turned his game around in the second, using superb baseline tactics and powerful groundstrokes.

Murray was surprised to be handed a berth in the final, especially since it was his second walkover victory of the tournament.

“To be honest, it hasn’t really happened to me that often where even one guy has done that,” said Murray, who had also reached the last 16 without hitting a shot when Canadian Milos Raonic pulled out of their third-round clash with a right ankle injury.

“To get two in one week is strange,” Murray said.

Murray had rallied to beat Serbia’s Janko Tipsarevic 4-6 6-3 6-4 in the quarterfinals on Wednesday.

Chasing a second title of 2012, to go with the trophy he captured in Brisbane, Murray said he wasn’t sure if the extra rest afforded him by Nadal’s sore left knee would be good or bad for him come the final.

“I don’t really know how I’m going to feel for the final, but I’ll definitely be fresh,” he said.