Rafa, Murray through to fourth round

Rafael Nadal swept into the fourth round in Miami after a crushing defeat of Radek Stepanek, while Andy Murray advanced to the same stage without hitting a ball. 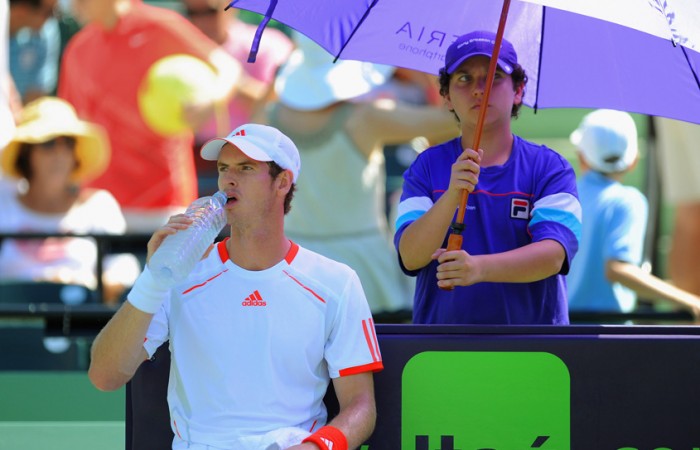 World No.2 Rafael Nadal cruised through to the last 16 at the Sony Ericsson Open, while fourth seeded Andy Murray advanced without even breaking a sweat on Sunday.

Nadal continued his domination over Czech Radek Stepanek with a 6-2 6-2 victory in a third round match on Stadium court.

Murray reached the fourth round by not hitting a ball when Canadian Milos Raonic withdrew with a right ankle injury.

Nadal, who is chasing his first Miami title, has now beaten Stepanek in all six contests dating back to their first meeting in 2004.

“I am just happy to be in the fourth round winning two matches with positive feeling and with comfortable results,” Nadal said.

Nadal finished with three aces, won 74 per cent of his first-serve points and saved both break point chances he faced in the 86 minute match.

“He’s a fantastic player and will be a very difficult match for me,” Nadal said of Nishikori.

“He has big talent to hit the ball very early, to play very aggressive.”

The 24-year-old Scot Murray will tackle French 13th seed Gilles Simon for a place in the quarterfinals of a tournament he won in 2009.

Highly-regarded Canadian 26th seed Raonic had already been forced to pull out of the doubles on Saturday where he and South African partner Kevin Anderson had managed just three games against Michael Llodra and Nenad Zimonjic.

The 21-year-old Raonic had been in a rich vein of form in 2012, winning titles in Chennai and San Jose and making the final in Memphis.

At Indian Wells last week, he was knocked out in the third round by eventual champion Roger Federer.

“The doctor in Spain doesn’t think it’s anything big. It probably just needs a couple days of rest and, with treatment, it should be OK in a week,” said Raonic.

“It’s frustrating, but you have to look at the big picture.”

Bulgaria’s Grigor Dimitrov recorded his first victory over a top 10 player when he beat seventh-seeded Czech Tomas Berdych 6-3 2-6 6-4 in two hours and 16 minutes.

Dimitrov saved five of seven break points to reach the fourth round of a Masters 1000 tournament for the first time.

The 20-year-old Dimitrov will next face ninth-seeded Serb Janko Tipsarevic, who fired down 10 aces to get past 18th-seeded Ukrainian Alexandr Dolgopolov 6-4 5-7 6-2.