Despite a tough draw, Bernard Tomic put up a admirable fight against No.5 seed David Ferrer in their second round match at Miami before falling in two tight sets. 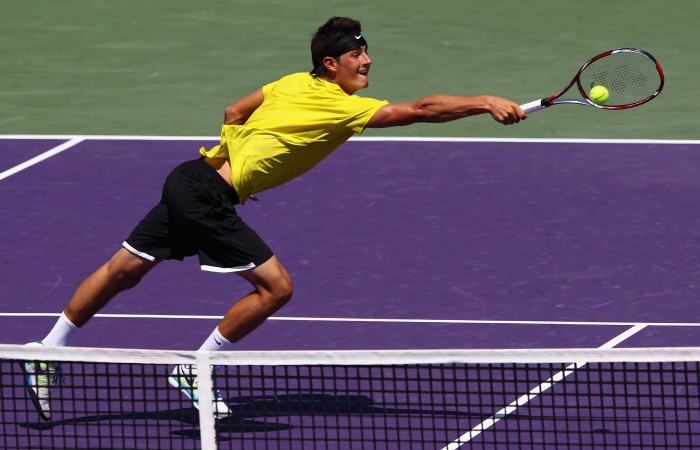 Bernard Tomic was always up against it going into his match with world No.5 David Ferrer.

It was the second time that Tomic had faced the Spaniard – renowned for being possibly the world’s best scrapper – having lost their first encounter in straight sets back in 2010.

A lot has changed since then, with Tomic having grown in both confidence and stature on the tour. What’s more, without a point to defend in the next eight tournaments, there’s every chance that he will break into the world’s top 30.

Today, he showed every indication that he deserves to be there. In a tense, tight match Tomic slipped to a 6-4 6-4 loss in one hour and 41 minutes.

“It was a tougher match than the way the score line presents itself,” Tomic said.

“There were a lot of break points in games but I didn’t manage to get a lot of chances to be up in both sets. He managed to play better on the right points. He’s a world-class player and I think I made the wrong decisions at the wrong times.”

It was a pretty accurate appraisal of the match from the 19-year-old. Broken easily in the opening game of the match, it took a few games for Tomic to settle. When he eventually did, he was able to match Ferrer point for point.

Throughout a fascinating, tactical first set Tomic pushed Ferrer around the court with apparent ease. The contrast in their styles was palpable. Tomic looked so relaxed that he might as well have been having a Sunday afternoon hit with a mate, while Ferrer grunted, groaned and chased everything down.

As the set unfolded the Australian No.1 got a better read on the Ferrer serve. So much so that at 4-3, he was able to conjure up a service break to level the set.

But that exposed a slight flaw in his game this past couple of weeks: the serve. He couldn’t consolidate the break, and the Spaniard broke back immediately before serving out the first set.

“You serve well a few weeks, then you serve bad,” Tomic observed.

“Last year at Wimbledon I was serving well for a period of two or three weeks. On big points I could serve it out as opposed to the last four weeks when I’ve been struggling on my serve.”

Going into the second and the signs were immediately positive for Tomic. A comfortable hold was followed by a relatively straightforward break. But again Ferrer stepped it up and broke back.

Each player broke again, before the game turned on a knife edge with Tomic serving at 4-4.

The first point in the game was about as good as you can get. The second looked set to follow suit, before a poor call on a ball that was clearly in rendered Tomic’s exquisite lob void after Ferrer challenged.

What should have been 30-0 became 15-all, and Tomic was rattled. Sensing this, Ferrer turned the screw and fashioned a couple of break points. Tomic saved the first but there was nothing he could do about the second, and Ferrer had the crucial break and a 5-4 lead.

While the Aussie fought hard in that final game, Ferrer had the win in his sights, sealing an impressive – and hard-fought – win.

“He know his things and he knows how to play and get you in positions where the ball doesn’t feel as comfortable for you,” Tomic reflected.

“Off his backhand he can’t really hurt you as much but he sets up to get the right ball and he starts moving me and he knows how to move me well. He did that today.”

Tomic is getting closer and closer to the “big” guys. And he’s beginning to understand what he has to do to beat them.

“The top players that are leading the sport now – the Rogers, Rafas and Novaks – do a bit of a different job when they attack off the ball,” he said.

“Me, I attack well but sometimes I can attack on the wrong ball. It can cost me. I can get away with winning a match or two but in the long run you need to learn how to attack well off the right balls.

“Today’s match was good, I enjoyed playing David and I can learn a lot from a player like that who doesn’t have as big a body as me or athleticism but he uses his body well and he’s there for a reason. It’s a learning curve for me to see how these players play in the top.”