Tomic sets up third round clash with Ferrer

Benard Tomic broke a two-match losing streak by winning his first round encounter against Sergiy Stakhovsky at the combined ATP/WTA event in Miami. 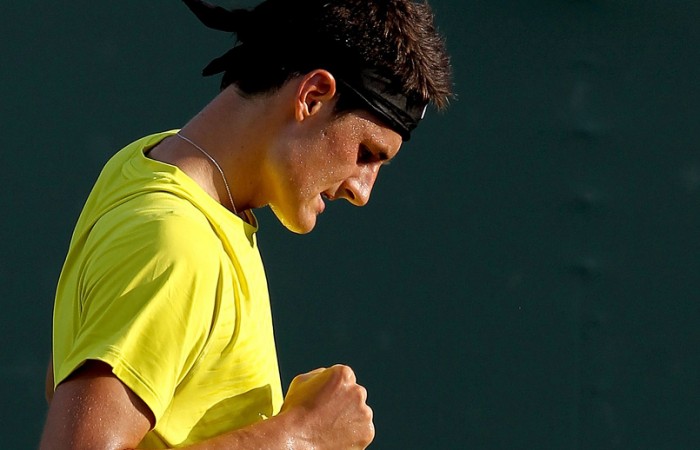 There are no easy matches at a tournament like Miami, and in Sergiy Stakhovsky Bernard Tomic probably expected a tough encounter. He got one.

It took Tomic 90 tricky minutes to overcome the world No.74, during which time he had to pull out some of his best tennis to record a 7-6(4) 6-3 victory.

“Today was a good match. I played well – better than last week – which is why I think I won,” he commented afterwards.

It certainly was a good win after a disappointing first-round exit to Gilles Muller in Indian Wells. In a match that started at a frenetic pace, both players enjoyed dominant service games, but with Stakhovsky edging Tomic in the early exchanges.

Tellingly, though, the Ukranian was unable to break the Aussie No.1, and soon Tomic started to settle. The pair continued to hold serve throughout the first set, which eventually went to a tiebreak.

It was at this point that Tomic seemed to really get a feel for both the court and his opponent. Always ahead in the breaker, he sealed the first set with a relatively straightforward scoreline of 7-4.

“I had trouble reading the serve in the first set. Once I managed to get hold of that I returned his serve pretty easily and got a lot of return points. Off the ground I played much better and I was aggressive at the right times,” he said.

The second set was an entirely different affair from the first, with back-to-back breaks followed by some nerve-wracking games with both players looking to take their chances.

In the end, Stakhovsky was the first to blink. Serving at 3-4, the Ukranian played a comparatively substandard game which allowed Tomic to snatch the break.

And that proved decisive in the end. Stakhovsky worked hard to break back, but when he put up an easy smash for Tomic on match point, the Aussie made sure it was all over.

It was a good start to Tomic’s Sony Ericsson Open campaign and an excellent opportunity to get a feel for the match courts – which are playing much faster than the practise courts – ahead of a tough second-round tie against David Ferrer.

“I played him once before a few years back and lost. He’s been top 10 for the last year or so and he’s a very good player, a tough competitor and all I can do is try and keep this level and hold this level.

“To beat him I’ve just got to be a bit more patient and hold the ball a bit deeper. If I hold the ball deep David can’t hurt me as much and I’ve got to keep my unforced error rate down a bit as well.”

We’ll bring you text coverage of that match on twitter (@tennisaustralia) so don’t forget to follow us!