The fitting of the final truss on Melbourne Park's new Eastern Plaza is another step toward enhanced facilities for elite Australian tennis talent. 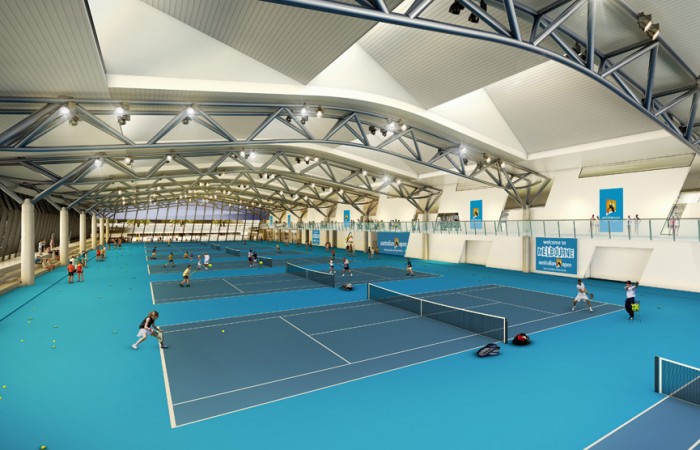 The final truss on the new Eastern Plaza at Melbourne Park has been put in place, another step toward securing the future of the Australian Open in Melbourne and providing elite Australian players with the best possible facilities for preparing and developing their games for success on the world stage.

The Eastern Plaza is the second component of the $363 million first stage of the Melbourne Park redevelopment project, and is expected to be completed by the 2015 Australian Open.

It will act as a comprehensive, year-round, all-weather dedicated tennis facility, providing a state-of-the-art training environment for elite players and juniors coming through the National Academy program.

Video playback facilities adjacent to the courts will be available to players so they can easily analyse and improve their games, and they will also have access to a centralised warm-up and recovery centre with lounge areas, computer facilities and on-site catering.

Of particular note are the clay courts, part of Tennis Australia’s concerted efforts to get more players training on and exposed to the surface as a crucial component in their playing development.

Scott Draper, Head Coach of Tennis Australia’s National Academies, said these courts would allow elite players and emerging juniors to train and play in tournament competitions, providing them with invaluable experience for events such as the French Open.

“(With) $363 million being invested into the Australian Open and this sport, we’re just so lucky. The young players in this country … for them to have the opportunities of a facility like this all right here … I wish I was 14 again and trying to become a tennis player,” he said.

“Clay really is just so good for player development. I guess the tactics of the game, the sliding, the physicality, the mentality of the game – it’s a wonderful surface, and it’s something that we really want to grow in this country. For us to be able to put some new claycourts right at this facility is just extraordinary for these young kids.

“A facility like this really can just inject that enthusiasm and keep us on track.”

Dr Napthine said that the multi-million dollar redevelopement at Melbourne Park provided benefits for all concerned.

“It’s all about securing the future of the Australian Open and making it better for players, for patrons, and for the economy of this state,” he said.

The Melbourne Park redevelopment will cater for the growing popularity of the Australian Open, with attendance figures having soared by more than 400,000 since the tournament was first staged at the site in 1988.

It will also help to ensure that Melbourne Park remains the home of the Australian Open for generations to come.