Aussie tennis legends Rod Laver and Mark Woodforde have been honoured with International Tennis Hall of Fame official rings in a ceremony at Indian Wells. 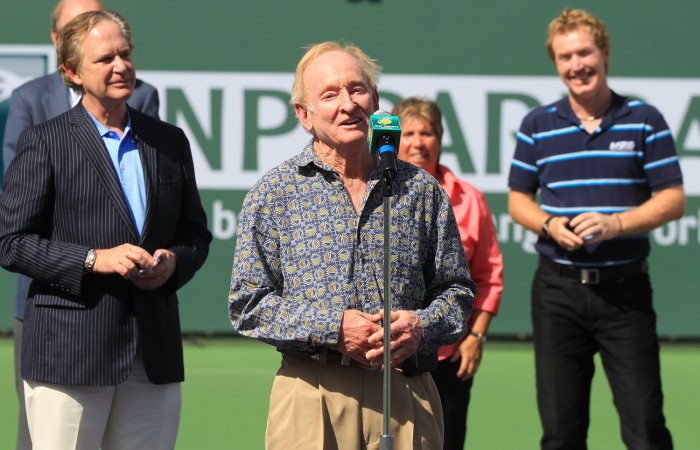 Australian tennis legends Rod Laver and Mark Woodforde were joined by women’s champion Rosie Casals in a ceremony at the BNP Paribas Open at Indian Wells, in which the trio was presented with official International Tennis Hall of Fame rings.

The personalised rings were introduced last year and are being presented to Hall of Famers at tennis events around the world over the next few years as a special symbol of their Hall of Fame induction.

The rings bear a green stone set in gold, to complement the Hall of Fame’s brand colours. In addition, the rings are etched with each honouree’s name and the Hall of Fame logo crest. The rings have been generously underwritten by The Bruce T. Halle Family of Scottsdale, Arizona.

Laver was inducted into the International Tennis Hall of Fame in 1981, while Woodforde was inducted alongside his doubles partner Todd Woodbridge in 2010.

“Fifty years after his first Grand Slam victory in 1962, we’re so pleased to celebrate Rod Laver this year by presenting him with his official Hall of Fame ring,” said International Tennis Hall of Fame & Museum chairman Christopher Clouser.

“We’re also glad to partner with the BNP Paribas Open in this ceremony to honour one of the greatest doubles players of all time, Mark Woodforde, as well as Rosie Casals, who we salute for both her incredibly successful playing career and her dedication to advancing the women’s pro game.

“As Hall of Famers, Rod, Mark, and Rosie are already among an elite group of athletes. Today, we are pleased to be able to recognise their achievements once more with this special ring, which only the most successful and influential individuals in tennis will have the honour of wearing.”

Clouser presented the rings on Stadium 1 at the BNP Paribas Open in Indian Wells, California. The tournament counts Woodforde among its past champions, as he and Woodbridge won the doubles title in 1996. Also participating in the ring ceremony was tournament chairman Charlie Pasarell and tournament director Steve Simon.

Even among the greatest legends of tennis, Laver stands out in an elite category of the best of the best.

In addition to capturing an extraordinary 200 titles and 11 major singles titles, Laver was the world No.1 player for seven consecutive years from 1964 to 1970. He is the only tennis player ever to have twice achieved a Grand Slam, winning all four major singles titles in both 1962 and 1969. In addition to his impressive singles career, Laver captured six major titles in doubles and three in mixed, and he played an integral role in leading the Australian Davis Cup team to victory four times.

Woodforde partnered with countryman Todd Woodbridge to form one of the greatest doubles teams of all time. Collectively known as “The Woodies,” the duo captured 61 doubles titles, including 11 majors, and won two Olympic Medals – Doubles Gold in 1996 and Doubles Silver in 2000. They also helped to clinch the Davis Cup for Australia in 1999.

In all, Woodforde won 67 doubles titles, four singles titles and five mixed doubles crowns. He won each leg of the Grand Slam in men’s doubles as well as in mixed doubles. He held down the No.1 ranking in doubles for 84 weeks during his career and was also ranked within the top 20 in singles.