Roger Federer and Rafael Nadal will play out the next chapter in their absorbing rivalry in the semifinals of the BNP Paribas Open. 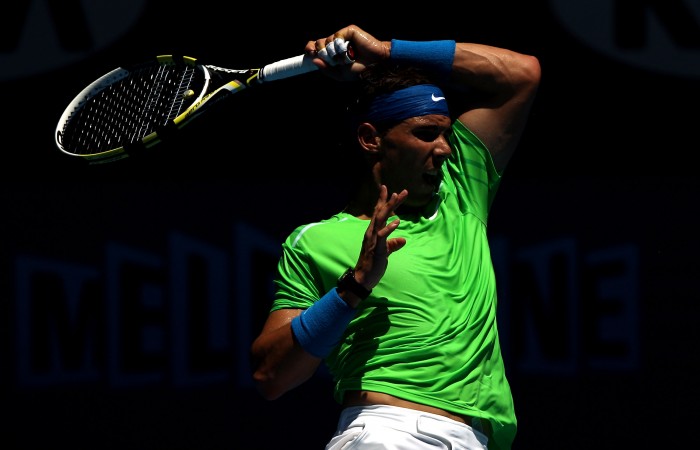 Rafael Nadal outlasted David Nalbandian 4-6 7-5 6-4 at the Indian Wells Masters on Friday to set up a semifinal showdown against rival Roger Federer, a rematch of their Australian Open semifinal.

Federer had an easier time in his quarter-final, beating Juan Martin del Potro 6-3 6-2 for his fourth victory over the Argentine this year.

World No.2 Nadal handed No.3 Federer one of his two losses since last year’s US Open when he beat the Swiss star in the Australian Open in January.

They will play on Saturday, when rain and wind is forecast to move into the Coachella Valley, spoiling the sun and warm temperatures that have prevailed during the two-week tournament.

Nadal hadn’t lost a set coming into the quarterfinals, but Nalbandian won the final three games to put an end to that run.

The Argentine was full of confidence, having earlier taken out Janko Tipsarevic and Jo-Wilfried Tsonga – his first time beating two top-10 players at the same event since 2008.

He led 4-3 and 5-4 in the second set before Nadal reeled off the final three games to take the set, breaking Nalbandian in the 11th game on a double fault.

Nadal broke three times in the final set, including at love to go up 5-2.

Federer has been fighting a cold during the tournament, but it didn’t seem to affect him against del Potro.

He needed just 69 minutes to dispatch del Potro, despite a marathon first game that lasted 11 minutes thanks to a problem with the video replay.

Federer put on an impressive serving display, hitting a 203 km/h ace to get to match point.

The first set began and ended with video challenges that benefitted Federer.

In the opening game del Potro tried to challenge a call on Federer’s serve by asking for a video review on the Hawkeye system.

The serve was called in but del Potro thought it was out.

“It was clearly out and the machine didn’t work,” del Potro said.

“The chair told me he made a mistake.”

Federer said it was unfortunate but didn’t think the failed challenge by del Potro had an effect on the outcome.

“Crazy enough, when I played Rafa in Wimbledon, at 6-all in the fifth, Hawkeye wasn’t available anymore because of the light. That was great for us to know. It wasn’t such an important match. Who cares?” he said sarcastically.

“I thought it was funny he (del Potro) was getting so upset.

“It was a tough call for him but I don’t think it had an effect on the match.”

ATP Tour officials said the problem with the replay came from a dropped internet connection.

Hawkeye also had a major involvement in the final game of the first set as well.

Federer served and it was called out but he challenged and the replay — which was working again — showed it was in.

Upon hearing the verdict, del Potro walked towards the video board, turned his racket around and pretended to shoot it.