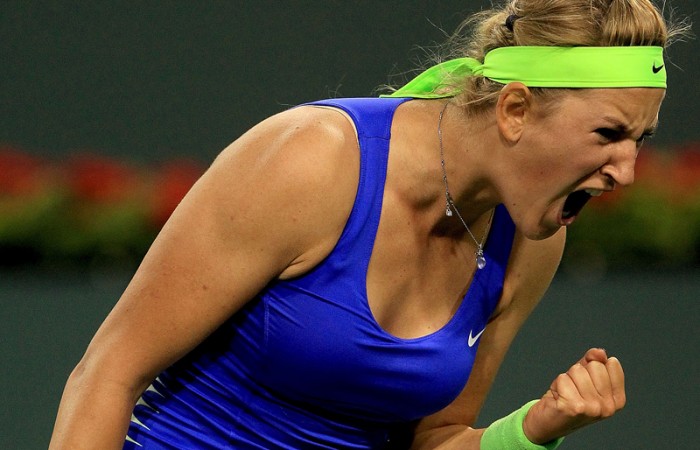 Top seed Victoria Azarenka flirted with disaster and a first loss of the season but scratched through over German Mona Barthel to reach the third round of the Indian Wells Masters tennis event 6-4 6-7(7) 7-6(6) on Friday.

The world No.1 only just managed her 18th win of the season as she held off the battling No.37, who saved a match point in the second set tiebreaker and two more in the third-set decider before going down on a backhand long after three hours.

“It was survival, but it’s a good feeling also to come after a match like this with a win,” said Azarenka.

“I could have been already beating myself up somewhere in my house after losing.

“But I’m here, you know, and I got through. It’s a good sign to win when you’re not playing your best. It’s more joyful.”

Azarenka, with three trophies this season and finals at her past five events, got a shock as she led a set and 5-1 over Barthel, only to see the German who won her first title in January at Hobart make a storming comeback.

Barthel took the second set in a breaker and began the third with a break as Azarenka committed one of her dozen double-faults before failing twice to serve out the match in the second set.

The German seized a 4-2 third-set initiative before Azarenka hauled it back to lead 5-4. The last two games were both breaks, forcing another tiebreaker.

The scrappy Barthel finally went down on Azarenka’s fourth winning chance of the evening.

There was no drama for fifth seed Agnieszka Radwanska, who beat Sorona Cirstea 6-2 6-4.

Ex-world No.1 and 2010 champion Jelena Jankovic felt the effects of a long flight from Malaysia as the 12th seed lost her opening match to American Jamie Hampton 6-4 6-3.

Jankovic was coming off semi-finals in Dubai and Kuala Lumpur in recent weeks.

“It was a bad day of tennis for me, I just did not feel the ball,” said Jankovic after her second-round loss following a bye.

“My legs felt so heavy on the court, I was moving very badly.”

In men’s first-round play, German veteran Tommy Haas beat Finn Jarkko Nieminen 7-6(9) 6-4, with that pair playing for the first time in a decade.

Michael Llodra fired an insult at Ernests Gulbis on the way to a 6-3 5-7 7-6(3) win in their bad-tempered match while Russian Nikolay Davydenko beat Azarenka’s boyfriend Sergey Bubka 7-5 6-3.