Jarmila Gajdosova and Casey Dellacqua have won through to the second round of the WTA Malaysian Open, albeit in very different circumstances. 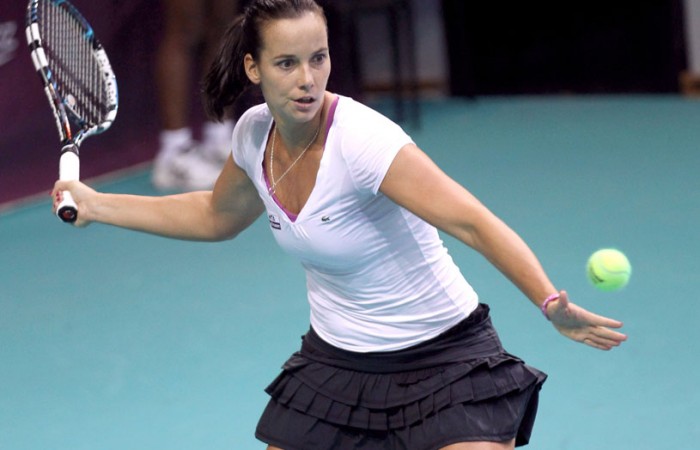 Jarmila Gajdosova and Casey Dellacqua have moved into the second round of the WTA Malaysian Open.

A wildcard into the event, Gajdosova struggled on serve and dished up nine double faults, but did enough to set up up a second-round meeting with Greece’s Elini Daniilidou.

Daniilidou defeated crowd favourite Sania Mirza of India 6-2 1-6 6-4. Mirza, who has fallen to No.129 in the latest world rankings, blamed fatigue and a fever for her loss.

Ahead of her match with the Australian, Daniilidou said that the draw was not easy.

“But I’ve heard that Jarmila has been struggling lately. I’ve never played Jarmila so I can’t say much,” the world No.81 said.

It was a resounding win for the 27-year-old, and her second consecutive straight-set drubbing of the Serbian, the last coming when Dellacqua defeated Jovanovski in the opening round of the Australian Open.

It was already the pair’s third meeting in 2012, with Jovanovski claiming the honours in the first round of the Brisbane International in January.

Dellacqua will next face Taiwanese qualifier Su-Wei Hsieh, who sent eighth seed Anne Keothavong of Great Britain crashing out of the tournament thanks to a 6-4 7-5 win.

The British star wasn’t happy with several line calls and rain interruptions, which affected her performance.

The wins to Gajdosova and Dellacqua means there are now four Australian women in the second round – on Monday, defending champion Jelena Dokic and Olivia Rogowska both won their first round matches in straight sets.

With Dokic and Rogowska now scheduled to play one another, Australia is guaranteed a representative in the quarterfinals, with the winner to potentially meet Gajdosova in the final eight.

Meanwhile, former world number one Jelena Jankovic scraped through the opening round, barely beating Caroline Garcia of France in a hard-fought three-set thriller.

Jankovic, second seed in the tournament, had to slog for nearly three hours before pulling off a 7-6(7) 4-6 7-6(2) victory over 17-year-old Garcia, who fell apart towards the end.

Rain interrupted the game several times, with Jankovic of Serbia saying she slogged to play in the humid weather after only two days of training in Malaysia.

“I was down and almost lost the match … But I managed to stay tough and mentally strong in the last set,” Jankovic, who turned 27 on Tuesday, said.

“I didn’t know what to expect when I was drawn to play her,” she said about Garcia.

“All the credit goes to her for this match. She’s young and had nothing to lose. She came out strong and was pushing me as well.”

The heavy rain also played havoc with the scheduling, with the top seed Agnieszka Radwanska’s match against Akgul Amanmuradova postponed to Wednesday.