Roger Federer remains on track to win his first title in Dubai since 2007, easily accounting for Michael Llodra in the first round of the ATP event. 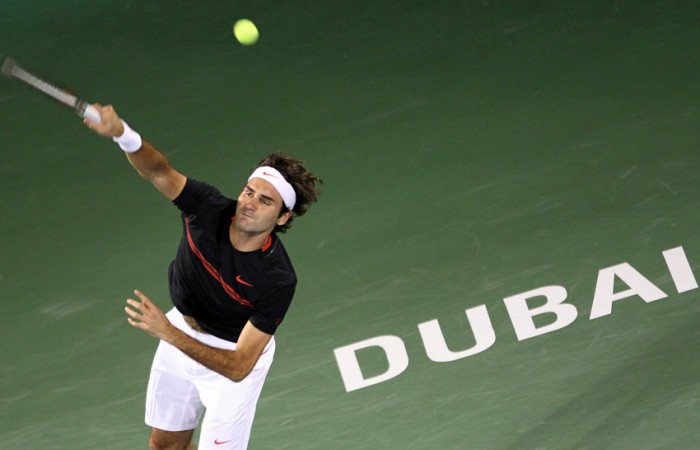 Roger Federer has made a regal start to his bid for a fifth career title at the Dubai Championships, hammering good friend Michael Llodra 6-0 7-6(6) to continue his excellent run of form in 2012.

The second seed was untouchable in a 17-minute opening set, losing just seven points. Llodra finally won a game after 25 minutes of play for one-all in the second set. The veteran Frenchman managed to make a match of it by taking the set into a tiebreaker before going down after 67 minutes on court.

Federer, who won his last Dubai title in 2007, didn’t miss a beat as he carried on after lifting a 71st career title nine days ago in Rotterdam. He will next face Feliciano Lopez, who beat Nicolas Mahut 6-4 6-4.

“It was a great way to start the week, 6-0 in the first set,” said the Swiss. “I had to make sure I controlled as much as possible.

“Michael is dangerous, he just came from Europe so he was missing some of his range. He had a few too many double-faults (five) but served better in the second set.”

The 40th-ranked Frenchman put Federer in brief danger with a set point in the second-set tiebreaker, which the Swiss saved with a forehand winner.

“I played solid all through, it all came together at the right time. I’m happy things went so well early in the tournament.”

Murray, feeling poorly with flu-like symptoms, managed to hold off German left-hander Michael Berrer 6-3 4-6 6-4 for a spot in the second round.

Mikhail Youzhny earned a Russian win as Frenchman Richard Gasquet quit trailing 6-3 after half an hour with illness.

Swiss qualifier Marco Chiudinelli, a Basel childhood mate of Roger Federer, will line up for the first time against Murray after putting out Nikolay Davydenko 6-4 5-7 6-4.