Agnieszka Radwanska will move into the top five for the first time in her career after defeating Julia Goerges to claim the WTA Premier event in Dubai. 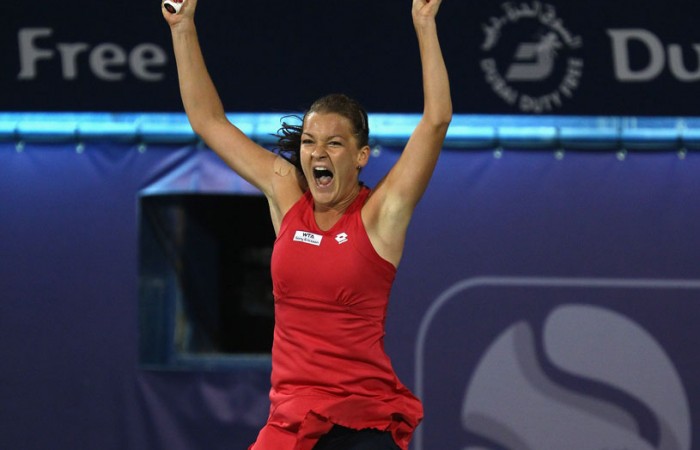 Poland’s Agnieszka Radwanska signalled herself as a growing threat on Saturday when she clinched her eighth career title courtesy of a 7-5 6-4 win over Germany’s Julia Goerges in the final of the Dubai Open.

The 22-year-old’s win underlined her as one of the game’s cleverest players, her subtle changes of pace and direction luring her more powerful opponent into self-destruction.

Goerges nevertheless did well enough, during a week in which she also beat former world number one Caroline Wozniacki, to suggest that her flat-hitting, net-attacking game may play a more prominent role in future.

“I had to play my best to beat her,” said Radwanska, who has lost only to world number one Victoria Azarenka this year. “She hits so well it is hard to see the ball.

“But I try to be calm, because, if you’re not, everything gets worse. I’m happy to have been playing great tennis at the start of this year. I just hope I can play this tennis the rest of the year.”

There were two moments when the match might have taken a different course.

One came towards the end of the first set when a Goerges break-back threatened to develop into dangerous momentum, and the other happened when a Hawkeye decision went against her, preventing her reaching break point at the start of the second set.

After Georges recovered from a bad start and went from 2-4 to 5-4 she would also have reached 6-5, motoring well, had she converted any of her four game points in the 12th game.

But Radwanska skilfully denied her all four of them, and at break point down Goerges reached a decent position at the net, only to volley wide.

Goerges also began the second set encouragingly and thought she had earned a chance to reach 2-0 when at deuce a line judge called Radwanska’s inside-out drive wide.

But the Pole demanded a video replay which showed the ball catching the outside of the line as it slithered into the tramlines.

Perhaps the disappointment affected the unseeded player, for Goerges dropped serve in the next game and was never quite able to repair the damage.

Radwanska held serve all through the second set, weaving attractive ground stroke patterns behind mostly well-placed deliveries, and sturdily surviving a break back point at 30-40 in the final game.

The closeness of that finish suggested Goerges is capable of improving on the career-best ranking of 16 which she will achieve next week, and perhaps of pushing into the top ten.

One of her improvements is in her mind.

“When something didn’t go in the direction I wanted to, it really used to affect me mentally,” Goerges admitted. “Now I try to get out of it and take the challenge.”

The week also saw Radwanska score her 300th win on tour, beat Jelena Jankovic, the former world number one from Serbia in the semi-finals, and earn her biggest pay packet, $446,778.

She did so on a very rare occasion when a women’s champion will earn more than a men’s — fully $US37,000 more.

That is because although the two Dubai Open singles events have an identical prize fund total – $US2,000,000 — next week’s men’s draw has four players more.