Jo-Wilfried Tsonga and Juan Martin Del Potro have set up a blockbuster semifinal at the ATP event in Marseille after each enjoyed straight-set quarterfinal wins. 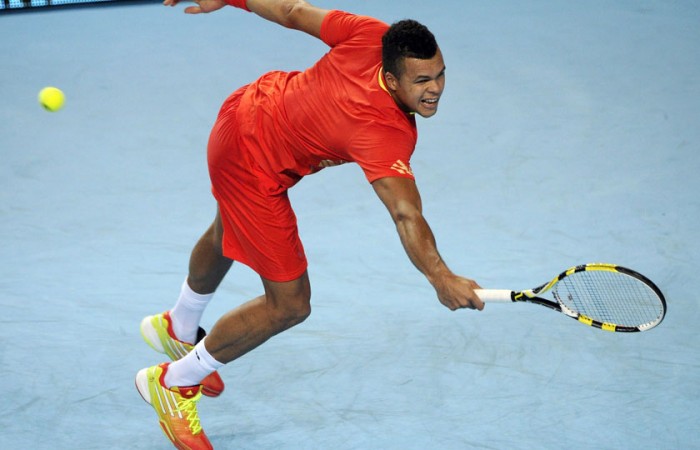 Jo-Wilfried Tsonga beat Edouard Roger-Vasselin 6-4 7-5 on Friday to reach the semifinals of the Open 13 tennis tournament in Marseille.

Roger-Vasselin double-faulted at 6-5 in the second set to give Tsonga two match points. Tsonga converted the first on a forehand error from Roger-Vasselin.

“I didn’t play better than him today,” said Tsonga, the 2009 champion.

“But I was stronger in my head in the key moments.”

Del Potro served 15 aces in a tight match where he won just one more point than Gasquet – 78 to 77.

The fourth-seeded Argentine led 3-1 in the last set but Gasquet, a former top-10 player, broke back in the eighth game.

Del Potro then saved a set point at 6-5 to force a tiebreaker before clinching victory with a diving backhand volley.

“For a 250 tournament, it’s not like a quarter-final. This match could be a semi or a final, for sure. Now I will play Tsonga and it’s still semi-finals. You can see how tough is this tournament.”

Third-seeded Janko Tipsarevic of Serbia beat Ivan Ljubicic of Croatia 6-4 6-4, and will next play Michael Llodra, who downed qualifier Albano Olivetti 7-6(5) 7-5 in an all-French quarter-final.

Tipsarevic did not face a break point and broke Ljubicic’s serve in the opening game of the first set before breaking for a 3-2 lead in the second.

Tsonga was the player with the most aces on the ATP Tour last season, although France has found another hard-serving player in 20-year-old Olivetti.

Olivetti lost to Llodra, but has still left an impression on the home crowd after beating Mardy Fish on Thursday.

The 2.03-metre Olivetti hit a serve of 254 kilometres per hour last year on the Challenger Tour.

Ivo Karlovic of Croatia still holds the world record for the fastest serve with 251 kilometres per hour as only performances on the ATP tour are taken into account for official records.

However, Llodra outslugged Olivetti with 14 aces to 13 on Friday, and did not face a break point.

“Michael served smartly,” Olivetti said. “He used very well the slice when serving to my backhand. He was also stronger than me on service returns.”

The 388th-ranked Olivetti double-faulted twice in the tiebreaker and Llodra won the first set when Olivetti sent a backhand into the net.