Defending champ knocked out at Dubai

Caroline Wozniacki's hopes of defending her title at the WTA event in Dubai were dashed after a straight-set defeat by German Julia Goerges. 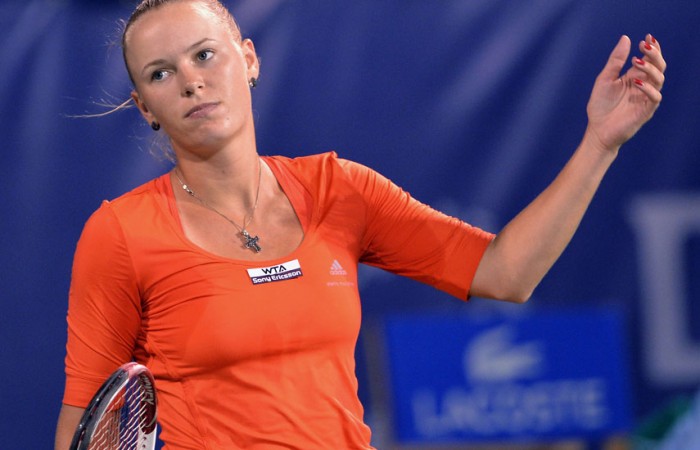 Caroline Wozniacki’s hopes of regaining the world No.1 ranking took another blow when her defence of the Dubai Open title ended in the semifinals on Friday.

She then fell at the first hurdle in Doha, and on Friday failed to capitalise on a 4-2 second set lead against unseeded German Julia Goerges and was beaten 7-6(3) 7-5.

Despite this there was also plenty of evidence why the world No.19 from Germany had beaten her better known Danish opponent in both their past two meetings.

Goerges, who will face Poland’s Agnieszka Radwanska in Saturday’s final, hit the ball with great power, especially on the forehand, and was prepared to risk errors to apply pressure.

Had Wozniacki been more confident she might have held on to her serve in the seventh game of the second set and perhaps extended the match to a decider.

Instead she chose to dispute the Hawkeye replay decision which consigned her to 30-40 — a futile if emotionally understandable response which both indicated and heightened her frustration.

Mostly Wozniacki used a slower pace and changes of pace and direction, as well her impressive mobility to contain the Goerges bombardment, but she was not quite consistent enough.

“Today was just a day where you try, you try, you try, and it just doesn’t work. You know, you have some of these days sometimes,” said Wozniacki, who will also defend title-holder’s points at her next tournament, in Indian Wells the week after next.

“Overall, I think I played some good matches. I can take some positives from it,” she said, referring principally to her quarterfinal win over Ana Ivanovic, another former world No.1.

Goerges was thrilled with her triumph.

“When you see the draw you never expect to get to the final,” she said of something she had only achieved three times previously.

Goerges has enterprisingly taken advantage of a top half minus the injured world No.1 Victoria Azarenka, and which quickly lost the sixth-seeded semi-injured Marion Bartoli, beaten by Peng Shuai of China in the first round.

Goerges will play the in-form Radwanska, who has only lost to Azarenka this year and will climb one place to world No.5 if she takes the title.

The rising 22-year-old from Krakow overcame Jelena Jankovic 6-2 2-6 6-0 in a topsy-turvy match in which Radwanska started and finished the more patient and controlled player.

Radwanska admitted to finishing tired after a contest of one hour and 43 minutes in which she did plenty of running.

She also admitted to having had arguments with her father Robert, who last year alleged that she needed “a psychiatrist, a psychologist, something like that,” and with whom she has parted as a coach.

“On the court we always had a good relationship. He’s a great coach and he really taught me everything. But off court we had arguments,” Radwanska said.

“For sure without him I wouldn’t be here on the court. But sometimes it gets too much mixing up your private life with tennis.”