Stosur advances in Dubai, Dellacqua out

Following her finals finish last week in Doha, Sam Stosur has picked up where she left off with a win over Lucie Safarova at the WTA event in Dubai. 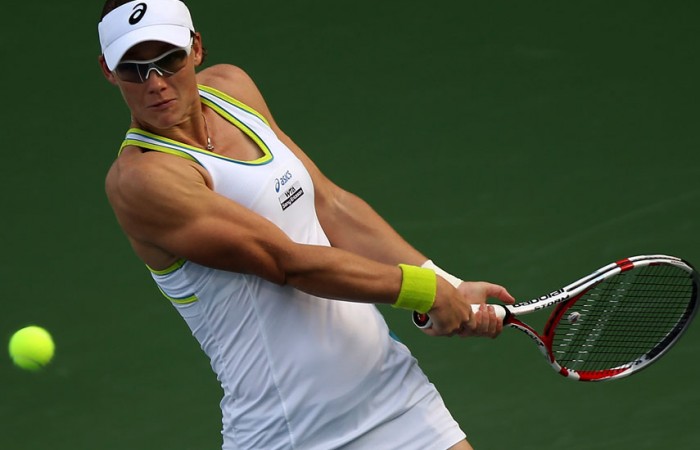 Fourth-seeded Australian Sam Stosur has advanced to the third round of the Dubai Tennis Championships by defeating Lucie Safarova of the Czech Republic 6-1 6-7(5) 6-1.

The US Open champion broke twice in both the first and third sets, and saved all nine break points she faced in the match.

Meanwhile, Stosur’s compatriot Casey Dellacqua was not so lucky, falling in her opening match to German Julia Goerges 6-0 6-2 in just 44 minutes.

After winning two matches Dellacqua fell in the final round of qualifying to Czech Iveta Benesova, but entered the main draw as a lucky loser following the withdrawal of world No.1 Victoria Azarenka.

Earlier in the day, Azarenka pulled out of the Dubai tournament because of a left ankle injury. The Australian Open champion, who has won 17 straight matches so far this season, says she will rest for two or three days.

“Obviously it’s very disappointing, but, I mean, it’s life. It’s sport. I just have to take care of it and that’s it,” Azarenka said. “I take a couple of days off just to see and hopefully it will settle down. … But it has to be taken care of right away.”

Azarenka injured her left ankle during last week’s semi-final match at the Qatar Open. However, she shook off the injury to beat Stosur in the final.

The ninth-seeded Sabine Lisicki of Germany also advanced on Wednesday after defeating Iveta Benesova of the Czech Republic 6-3 6-3. Lisicki will play Agnieszka Radwanska in the third round, after the fifth-seeded Polish player defeated Israel’s Shahar Peer 7-5 6-4.

Azarenka said the packed tennis schedule and increasingly tough competition could be partly to blame for so many injuries among the players.

“For me, obviously I played so much, and it was an unfortunate situation what happened in Doha,” Azarenka said. “But I mean, it’s just the game became so physical.

“Sometimes it’s really tough on the body week after week to play. For example, these tournaments back-to-back with such a tough field, it takes a lot out of you physically. It’s just tough.”