World No.1 Victoria Azarenka joins the growing list of top players to withdraw from the WTA Premier event in Dubai due to injury and illness. 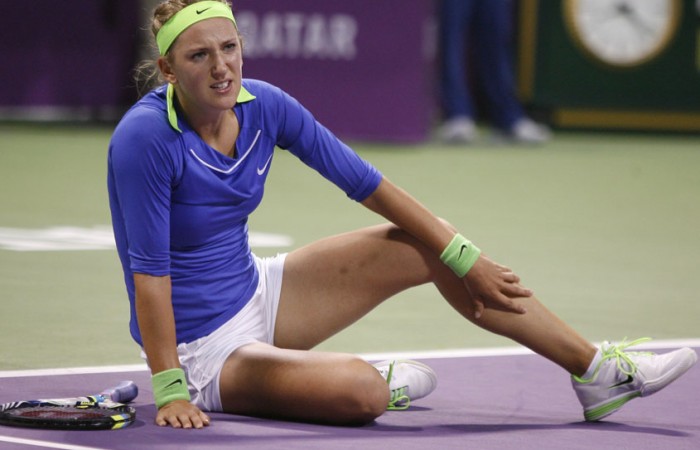 World number one Victoria Azarenka has paid the price for her 17-match winning start to the year after being forced to withdraw from the $2 million Dubai Open with a damaged ankle.

Azarenka has been suffering from the ailment ever since winning her first Grand Slam title, the Australian Open, in Melbourne three weeks ago.

She managed to struggle through in Doha last week and win the Qatar Open as well, but only by taking painkillers and risking compensatory injuries.

“I’m concerned not to do more damage,” said Azarenka. “I’ve been told to rest ever since Australia.

“I left it a couple of days (after arriving in Dubai) to see how it is, but it is difficult in that time to do a miracle.

“It will give me peace of mind now to make sure it is not really serious. It has to be taken care of right away.”

It means the Dubai Open has now lost both its top two seeds, with the second-seeded Wimbledon champion Petra Kvitova withdrawing with a virus before the tournament started.

Four well known names have pulled out altogether. The others are Li Na, the French Open champion from China, who has a back injury, and Vera Zvonareva, the former Wimbledon finalist who has a hip problem.

It may be a blessing in disguise for Azarenka, who admits there may also be psychological benefits in taking a break now.

“I definitely need time to take my mind off tennis,” Azarenka admitted. “I have not been home since for ever.”

She will now probably return to Minsk and take two weeks off before going to the tough American hard court swing in Indian Wells and Miami in March.

Azarenka also agreed that the setback might influence future decisions on her schedule. Rafael Nadal has reduced his schedule slightly this year, to protect his body, and Azarenka was asked if she might do likewise.

“I don’t want to repeat mistakes I made before,” she said. “I would sometimes play when I was not a hundred per cent, when I was only 50 per cent sometimes.

“It did no good for myself or the tournament. Health is the most important thing. After tennis there is hopefully a long life, and I can’t jeopardise that.”

The casualty list makes it much more likely that Caroline Wozniacki, the former world number one from Denmark, can make a successful defence of her Dubai Open title this week.