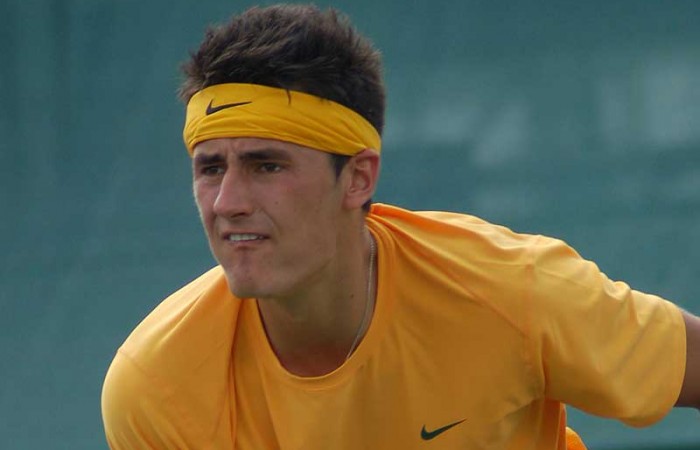 “One day I hopefully can win the Davis Cup,” Tomic said, appreciative of the sell-out Geelong crowd, who at times referred to him as ‘Saint Bernard.’

In the first singles rubber, Lleyton Hewitt defeated China’s No.1 Zhang Ze representative 6-2 6-1 7-6, and will now hope to seal the tie when he steps out on Saturday with doubles partner Chris Guccione against Zhang Ze and Li Zhe.

Following his victory over Zhang – which began easily and ended in a tussle – Hewitt warned that Wu Di was a far better player than his 500-ranking suggested.

“Di Wu is the best 500 player I’ve ever seen,” Hewitt said. Added Australian Captain Patrick Rafter following Tomic’s victory: “They [the Chinese players] don’t get out of the country as much as they probably should. If they did that they’d be around the 200 mark at least.”

Struggling with his returns, Tomic fell behind 3-0 in the second set of his match, but lifted his intensity enough to edge Wu with his deceptively low-angled slices, drop shots and deep ground strokes. How did Wu describe the experience of playing the young Wimbledon quarterfinalist?

Tomic said the wind had messed with his rhythm, while Rafter believed the most difficult aspect of the rubber was for the world No.36 to mentally stay in a match he was expected to win easily.

“Bernie more than anything struggled mentally,” said Rafter. “I know he’s hitting the ball well. It’s hard for him to get up sometimes for these sort of matches because he is playing someone he knows he should beat and he’s clearly a better player. To close that out he kept his mind together and that was the one thing I was proud of him, he probably didn’t play the prettiest tennis … but he found a way to win.”

Rafter admitted the Australian side had been in several tight spots today, but were in no mood to drop a rubber.

“He [Wu] put Bernie under a bit of pressure there for a while, if Bernie didn’t go with him he would have found himself in a tough four, five set match and I didn’t really want that, I wanted to be two nil up. That’s what we expected, that’s what we wanted on day one and we’ll try to close out tomorrow,” said Rafter.

A doubles victory for the home side on Saturday would propel them into a second zonal tie against either Chinese Taipei or Korea, with the winner progressing to a World Group play-off in September.