Jarmila Gajdosova made amends for her opening day defeat by securing a nail-biting win in the reverse singles as Australia trumped Switzerland 4-1 in their Fed Cup World Group II tie. 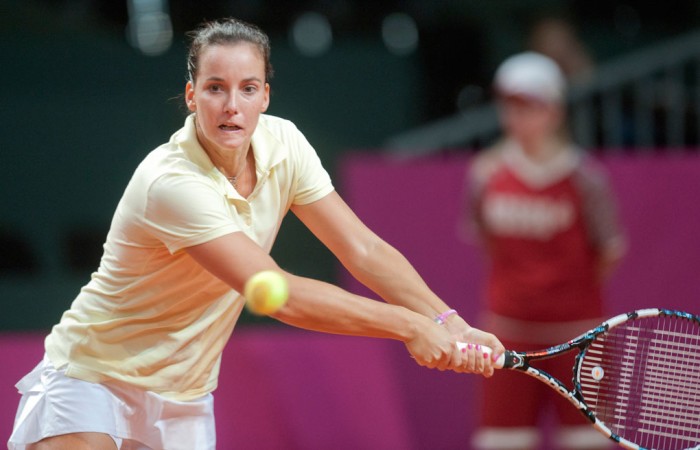 Jarmila Gajdosova made amends for her opening day defeat by securing a nail-biting win in the reverse singles as Australia trumped Switzerland 4-1 in their Fed Cup World Group II tie.

Gajdosova’s victory handed the tourists an unbeatable lead before Australian duo Casey Dellacqua and Jelena Dokic finished the job by taking out the dead doubles rubber 7-5 6-4 over Belinda Bencic and Amra Sadikovic on the indoor clay court.

It was Gajdosova’s second straight marathon match after losing an even longer contest to No.124 Stefanie Voegele on Saturday.

Australia will play one of the World Group first round losers in April for a berth in the elite eight-nation competition in 2013.

“I am happy to win the point that secures the ties for the team,” Gajdosova.

“They showed faith in me and the team has been very supportive.

“The Fed Cup means a lot to me. I was so disappointed with my loss and shed a tear afterwards.”

Stosur showed signs that she was emerging from her early season form slump by dismissing Voegele 6-3 6-2 in just over an hour.

The US Open champion felt she was building some momentum following her tough home summer.

“It has boosted my confidence and it is exactly the way I wanted to play as soon as I got over here,” she said.

“You want to win as many matches as possible to erase anything negative and it does not matter the opposition, it is always good to win.”

Team captain David Taylor said that Gajdosova had repaid the faith put in her following her loss to the unheralded Voegele.

“You could not have written a better script for her redemption today after yesterday’s defeat,” he said.

“She was serving at 5-3 for the match and played a poor game to lose the game.

“But she believed there would be another opportunity for her.”

Taylor felt that Gajdosova’s win could help turn around her ordinary start to the year.

“It is not easy playing against the crowd and you have your team on the sidelines and all the emotion and responsibility involved with that,” he said.

“I think this win will give her a real shot in the arm.”