It wasn’t just the Australian Open that enjoyed a record-setting two weeks – kids’ tennis program MLC Tennis Hot Shots racked up some impressive numbers of its own. 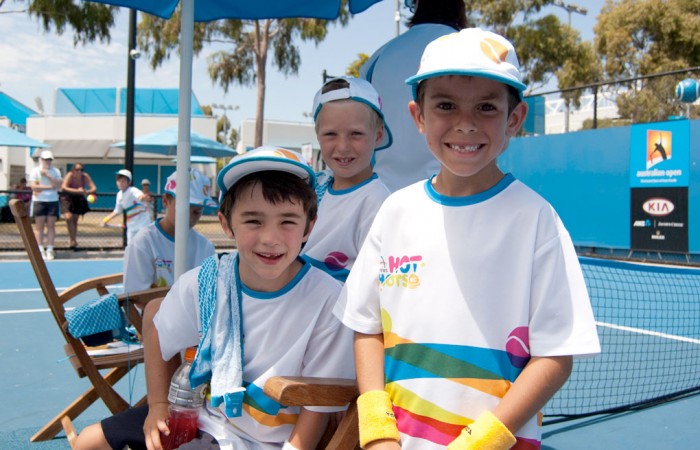 It wasn’t just the Australian Open that enjoyed a record-setting two weeks – kids’ tennis program MLC Tennis Hot Shots racked up some impressive numbers of its own.

It all started on Saturday 14 January, two days before the main draw began, when more than 9200 children enjoyed their own Grand Slam experience at MLC Kids Tennis Day. As well as playing on the Melbourne Park courts and having their photo taken with the Australian Open trophies, the kids also enjoyed an on-court showcase featuring world No.1 Novak Djokovic, No.2 Rafael Nadal, US Open champion Sam Stosur, and defending champion Kim Clijsters.

As the tournament got underway, 27,064 fans flocked to MLC Fan Zone on Grand Slam Oval, while a further 5988 people, including Dannii Minogue, Billy Slater and James Duckworth, had a hit on the MLC Tennis Hot Shots courts in Garden Square.

Perhaps most exciting of all was the opportunity for kids to get up close to their heroes. Thirty-four lucky MLC Tennis Hot Shots players received the opportunity of a lifetime when they tossed the coin before matches at Rod Laver Arena, Hisense Arena and Margaret Court Arena. Also, 426 young players had the chance to play on these courts prior to the beginning of play.

Visitors to the Open also had a chance to meet their favourite players, with 1447 kids receiving an autograph from MLC Autograph Island.

As well as the kids, the adults also got involved in a big way. Seventy-four teachers attended the Australian Open to discuss the Tennis in Schools strategy through a series of workshops. The MLC Tennis Hot Shots Mentor Program was launched prior to the AO, with a two-day workshop held for the 18 national mentors.

And 50 new coaches signed up during the Australian Open, meaning there are now 662 official coaches Australia-wide.

It’s been a massive two weeks for MLC Tennis Hot Shots, but this is just the beginning. Stay tuned to hotshots.tennis.com.au or follow us on facebook to keep up with the latest developments.