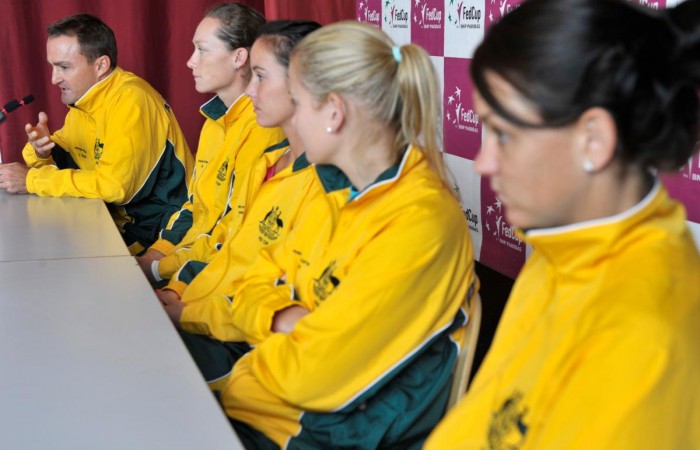 At Forum Fribourg today, Australian Fed Cup Captain, David Taylor talked about his initial impressions of Fribourg and the upcoming tie against Switzerland.

“We all arrived pretty frozen. It is very cold and quite a contrast to Melbourne,” Taylor said.

“We have just had one practice session on the court and the court is of a very good standard for temporary indoor courts. I think in the next few days the courts will adjust even more.

“We still have a little bit of work to do before Saturday but we will get there.

“[In April last year we were] the overwhelming favourites in our match.

“[In that tie against Ukraine] we lost at home so we do not need any more motivation. I think the painful loss of our last match is motivation enough.

“I think Sam will play. She is No.5 in the world and it is great to have someone of that ranking in our team.

“The second singles spot is still undecided and the decision will be based on our practice over the next few days.

“We normally have had a fairly consistent doubles team, at least for the last five or so years, but one of our top 10 players, Rennae Stubbs, retired so this team is looking for another No.1 doubles pair. We haven’t really found that yet so we will also have to decide on that closer to Saturday.”

Australia’s No.1 player, Samantha Stosur, also spoke to Swiss press today about what it means to play Fed Cup.

“I think it is always nice to represent your country in a team event.”

“We don’t play in a team event like this very often so when we get the opportunity too we all enjoy it and I think it is the only competition like this to play in.

Jelena Dokic shared Stosur’s sentiments stating “I love these weeks because the sport is so individual.”

“I like the team atmosphere. I always seem to play well in Fed Cup and for me it seems to bring out even more the fighting and I think that is why I win a lot of my matches.”

The Swiss team will feature world No.124 Stefanie Voegele, No.219 Amra Sadikovic, No.244 Timea Bacsinszky and No.1061 Belinda Bencic.

The tie, which will be played on an indoor clay court, is the fifth meeting in Fed Cup competition between the two teams with the Australians leading 4-1.

The Australians haven’t lost an away tie since 2008 and will be fighting to return to the World Group in 2013 with wins required in February and in April to return to the top eight next year.

The draw will be held later this week and the teams’ singles and doubles line-ups will be announced then.

Live scores will be available on tennis.com.au throughout the tie.