Update 10:00 pm. Luke Saville joined esteemed company when he won the Australian Open boys' title and not just by collecting the trophy from Ken Rosewall. 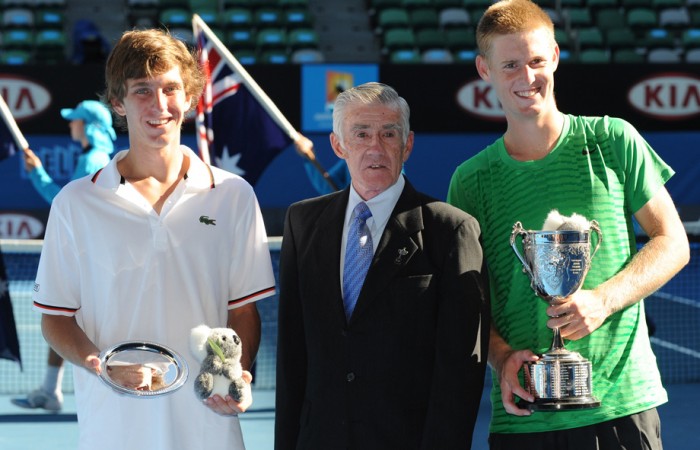 Luke Saville joined esteemed company when he won the Australian Open boys’ title and not just by collecting the trophy from Ken Rosewall.

The 17-year-old South Australian is now on the lookout for a wildcard into Wimbledon’s main draw, but knows defending his junior title will be his main focus.

“The junior tournament is the second week, so unless I’m in the quarters of the men’s, I’m pretty sure I’ll be playing juniors,” he said.

“But of course I’ll put my hand up for a wildcard. It’s obviously going to be an awesome experience if I get a wildcard into the men’s, but that’s a long way away.

“Obviously I’d love to play main draw there, but all I can do is try my best, get my ranking up, put my hand up. If they want to give me a wildcard, then awesome.”

With a current world ranking of 1177, success on the Futures circuit and a win or two at Challenger tournaments between now and June are essential if he is to justify a wildcard from the All England Club.

The world junior No.1 says he can’t split his Wimbledon and Australian Open titles, but was satisfied by his ability to handle the pressure as top seed and local favourite to beat unseeded Canadian Filip Peliwo 6-3 5-7 6-4 in the final on Rod Laver Arena on Saturday.

“To stand up to that pressure and win the tournament, it’s a massive relief, as well. So I can’t really put one in front of the other,” he said.

Saville received the trophy from the boy who won it in 1950 and then went on to claim four men’s titles, but Rosewall didn’t offer and sage advice, “just congratulations and had a few jokes,” Saville said.

“Obviously having him there is a massive honour and privilege, and it was good standing up there with him.”