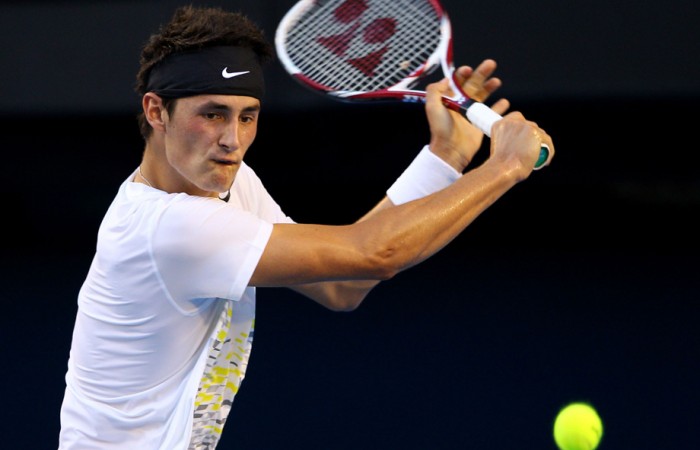 The master tamed the apprentice 6-4 6-2 6-2 in one hour, 44 minutes to leave long-time flagbearer Lleyton Hewitt as once again the last Australian standing at Melbourne Park.

Hewitt takes on world No.1 and defending champion Novak Djokovic on Monday night after inspiring even Rafael Nadal with his stirring run to the second week.

Tomic sported the very same Nike headband as Federer but was unable to match his boyhood idol’s brilliant touch and awesome firepower despite putting in a bold showing at Rod Laver Arena.

The 19-year-old had fantasised about being the first teenager to conquer the 16-times major winner since a youthful Andy Murray shocked Federer in Cincinnati in 2006.

Federer, though, raised his game to at-times imperious levels to deny the ambitious youngster and set up an enticing last-eight encounter on Tuesday with Juan Martin del Potro.

Federer was full of praise for his vanquished opponent, saying he had to pull out all stops.

“I played a really good match. I thought I had to. Anything else wouldn’t have got the job done,” he said.

“Bernard showed why he’s going to have a great future … he’s already very good – how much better do you want him?

Having experienced the same pressure himself early in his career, Federer urged fans not to place too many expectations too soon on the 19-year-old.

“It’s stressful sometimes being a teenager,” he said.

“I was the next Pete Sampras and I didn’t even have a title yet.

“He’s got to go step by step – one title first and then he’s already going to do great.”

Del Potro has moved stealth-like through the draw to qualify for his first Grand Slam quarterfinal since bringing down the mighty Federer in the 2009 US Open final.

Should Federer turn the tables on del Potro and improve his dominant record over the big Argentine to eight and two, the Swiss marvel could meet career rival Rafael Nadal in the semis.

Nadal first needs to get past Czech seventh seed Tomas Berdych in his quarter-final.

The youngest player to make the Open’s fourth round since Nadal managed the feat at 18 and 241 days in 2005, Tomic made an encouraging start to raise home hopes of a famous victory on Sunday night.

Full of confidence and riding a six-match winning streak, Tomic went game for game with Federer until double-faulting and pushing a backhand long to drop serve and trail 5-4 in the first set.

Rarely one to require a second invitation, Federer duly closed out the set after 35 minutes.

Tomic pushed an off-forehand wide to hand Federer a key early break in the second set and dropped serve to love to all but conceded the set.

He broke Federer for the one and only time to trail 4-2, but the four-times Open champ took a vice-like grip on the match when he broke Tomic for a fourth time to surge ahead two sets to love.

It was virtually lights out for Tomic when he lost his opening serve of the third set and good night when Federer volleyed into an open court on his first match point.