Australian men’s No.1 Bernard Tomic has scored one of the biggest Grand Slam wins of his career with a five-set win over No.13 seed Alexandr Dolgopolov. The 19-year-old overturned a lopsided win-loss record against the Ukrainian with the 4-6, 7-6(0), 7-6(6), 2-6, 6-3 victory, setting up a blockbuster fourth-round showdown with four-time Australian… 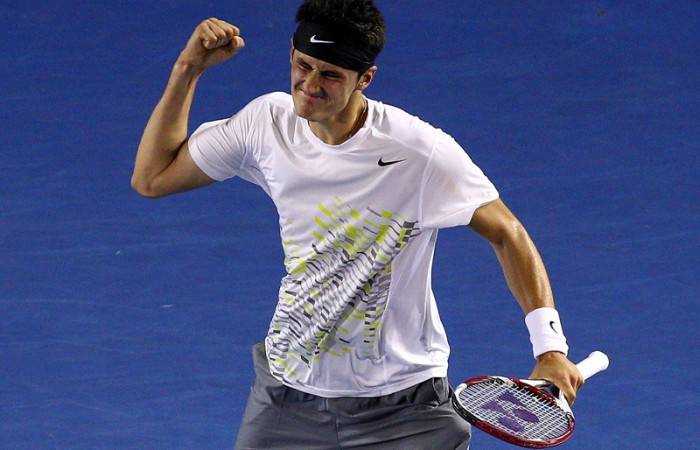 Australian men’s No.1 Bernard Tomic has scored one of the biggest Grand Slam wins of his career with a five-set win over No.13 seed Alexandr Dolgopolov.

The 19-year-old overturned a lopsided win-loss record against the Ukrainian with the 4-6, 7-6(0), 7-6(6), 2-6, 6-3 victory, setting up a blockbuster fourth-round showdown with four-time Australian Open champion Roger Federer in what will be the Swiss maestro’s 1,000th career match.

Tomic began brightly on a packed Rod Laver Arena, gaining a break and skipping out to a 4-2 lead.

From that point Dolgopolov flicked a switch, ramping up his level to reel off four straight games and take the set.

When Tomic went down a break early in the second set, he looked to be in dire straits. But foreshadowing the topsy-turvy nature of this contest, the young Aussie broke back and eventually found himself with a set point in the 12th game leading 30-40.

Although he was unable to convert, when the set eventually progressed to a tiebreak, it was one-way traffic.

Buoyed by his vocal home crowd, Tomic romped through the breaker without dropping a point to square the match at a set apiece.

The Ukrainian responded strongly, establishing a 3-0 in a perfect start to the third set.

But another momentum swing ensued. Tomic held to get himself on the board before breaking serve in the next game, beating his chest as he looked towards his camp. A game later, and he had tied the set up at 3-3.

It progressed on serve to another tiebreaker, which this time around was a much closer affair. Tomic gained an early mini-break, only to double-fault it away.

Tomic reached a set point which Dolgopolov erased with an ace, but the Ukrainian then committed two consecutive groundstroke errors – one each on forehand and backhand – to hand the 19-year-old a two-sets-to-one lead.

But as the story of the night went, this was far from over. Shrugging off the disappointment of his collapse at the end of the third set, Dolgopolov broke serve to lead 3-2 in the fourth, only to then call for the trainer and receive treatment on his lower back and right buttock.

Whatever the trainer did, it worked. Dolgopolov appeared to move freely and held to love to consolidate the break, and despite receiving more treatment at the next change of ends, wrapped up the set without the loss of another game.

And so to the fifth. It was Dolgopolov’s third straight match to go the distance at Australian Open 2012, and the second time Tomic had been stretched to five this week. If they were fatigued, they did a great job of masking it.

The crowd’s involvement seemed to err the visitor on, and facing a 0-1, 0-30 deficit, he responded with a flurry of winners to level scores.

Yet it was Tomic who struck the first blow of the set, coming out on top of an intriguing cat-and-mouse point by smashing a winner before going on to break serve. Casually rolling an off-forehand into the open court just minutes later, the local had quickly built a 4-1 lead.

Dolgopolov kept himself alive with an immediate service hold, but when Tomic smacked a running forehand winner midway through the seventh game before holding for a 5-2 lead, it appeared he’d dealt the Ukrainian a crushing psychological blow.

The No.13 seed comfortably held serve in the next game to banish that theory.

Yet faced with the biggest win of his short Grand Slam career, Tomic did not flinch. He put away a tricky inside-out forehand and then reached match point when Dolgopolov erred on his own forehand.

After missing his first opportunity, he sealed a famous victory when the Ukrainian floated a backhand long.