The brain of Bernard Tomic overcame the brawn of America's Sam Querrey as Australia's teenage tennis genius booked an Australian Open third round berth for the second straight year. 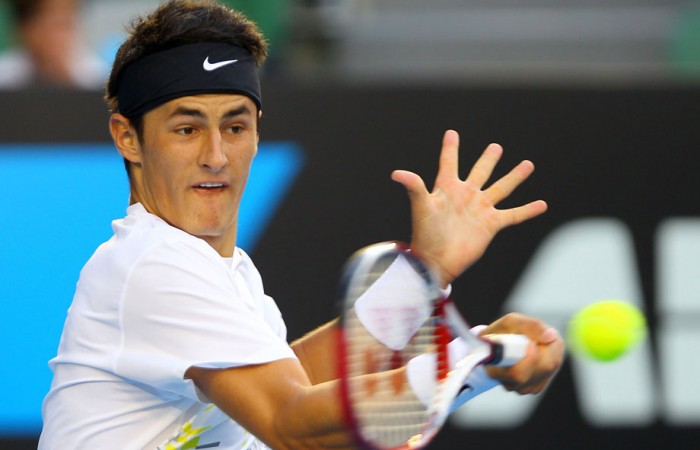 The brain of Bernard Tomic overcame the brawn of America’s Sam Querrey as Australia’s teenage tennis genius booked an Australian Open third round berth for the second straight year.

It was not quite of the magnitude of the 19-year-old’s first-round fightback from two sets down against Spain’s Fernando Verdasco.

Tomic last year fell to then world No.1 Rafael Nadal in the third round.

This time he will take on Ukrainian Alexandr Dolgopolov, who had to survive a five-set thriller against Tobias Kamke on Wednesday, his second five-setter of the tournament.

“You know, it’s not Nadal, so I think it’s OK. Better chance than last year,” Tomic said of the possibility of progressing to the second week of his home Grand Slam for the first time.

He was delighted with his ability to first recover from his Monday epic against Verdasco then weather an early storm against Querrey.

The American 24-year-old stands an imposing 198 cm and serves with venom to match his physique.

He made full use of that weapon and his powerful forehand in the opening set, in which he dropped just four points on serve.

But the 19-year-old showed typical composure and deft touch to mix up his shots and work his bigger opponent around.

It caused Querrey’s early rhythm to wane and Tomic to gain the ascendancy.

While Querrey is a former top-20 player whose ranking has only slumped to its current No.95 after an injury-hit 2011, it was the inexperienced Tomic who played like an old hand in the pivotal third-set tiebreak, which he raced through.

From that point, he always looked the likely winner and he took the fourth set in less than half an hour, serving it out to love.

“I was happy to win that first round. Now to win the second and play, you know, well, and come back from another set behind was really good,” he said.

Tomic said his clash with Dolgopolov shaped as another tough match, with the Ukrainian’s unconventional style making him a tricky opponent.

“He’s very unco and very weird to play, and I’m sure a lot of players say the same thing about him,” he said.