Tomic vows to keep up the fight

Bernard Tomic is confident he can sufficiently recover from his exhausting Australian Open start to see off Sam Querrey on Wednesday and remain on track for a blockbuster showdown with Roger Federer. 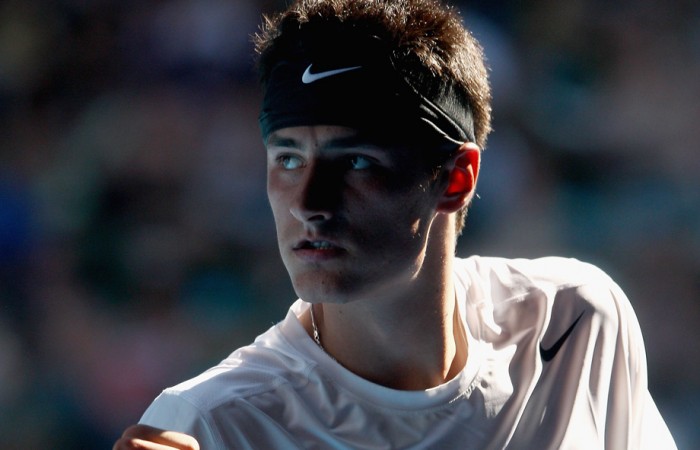 Bernard Tomic is confident he can sufficiently recover from his exhausting Australian Open start to see off Sam Querrey on Wednesday and remain on track for a blockbuster showdown with Roger Federer.

Tomic admitted he would have to scrap his summer routine of hitting the treadmill post-match for extra conditioning after battling intense heat for more than four hours in his five-set first-round comeback win over Fernando Verdasco.

> Video: Bernard Tomic on the up

“Yeah, I’m going to stop that for sure, have a bit of a rest. I think I deserve a rest,” he said.

“It was probably the toughest five-set match that I’ve ever played.”

But the 19-year-old’s father and coach John Tomic said his son would have no trouble backing up after spending the summer peaking for his first home grand slam tilt as Australian No.1.

Tomic was hoping for friendlier conditions than the sapping 30-plus temperatures he faced against Verdasco for his first-time meeting with Querrey, a former Queen’s Club champion and world No.17 but now ranked 95th following elbow surgery last year.

“I would love to play when it’s a bit cooler,” Tomic said.

“I play Sam now, which is a good match. He’s not a left-hander, so it’s a bit easier in a way.

“It’s tough when Fernando gets that ball to my backhand. It’s almost impossible to out-rally him.

Should he beat Querrey, Tomic would likely face world No.13 Alexandr Dolgopolov on Friday.

But Ukraine’s 2011 quarterfinalist conceded after struggling through his own five-set first-round victory that he was worried that a blood condition he suffers from had “raised its head at the worst possible time”.

“I hope it’s not that, just that something else is wrong with my body,” Dolgopolov said after recovering from two sets down to defeat Australian wildcard Greg Jones.

“I was breathing hard because my heart was going too fast and I had no power to play.

“There’s nothing much I can do. My tennis isn’t the concern for my next match – it’s my health.”

Federer will doubtless be keeping a close eye on how Tomic fares after having trouble against the teenager in a four-set win during Switzerland’s Davis Cup play-off victory over Australia at Royal Sydney in September.

“I saw how tricky it was to play against him, what a potentially good player he can become,” Federer said on the weekend.

“Now it is obviously Grand Slam time, much more physical like I said before.

“It’s going to be interesting to see how he handles first the expectations, then the heat, the long matches.

“I think if he gets through the first round, he can play a very good tournament.”