Ball through, Luczak out of qualifying

The second round of qualifying began today at Melbourne Park with light rain continuing to cause some disruptions in play. Two Australian men were in action early with wildcard Carsten Ball taking on Canadian ninth seed Vasek Pospisil and local favourite Peter Luczak – in his last ever Australian Open – up against Denmark’s Frederik Nielsen. In… 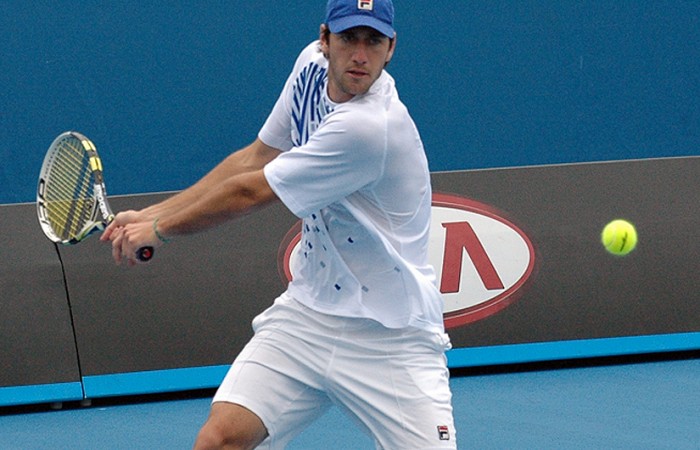 The second round of qualifying began today at Melbourne Park with light rain continuing to cause some disruptions in play. Two Australian men were in action early with wildcard Carsten Ball taking on Canadian ninth seed Vasek Pospisil and local favourite Peter Luczak – in his last ever Australian Open – up against Denmark’s Frederik Nielsen.

In the end, it was Ball, playing some of the best tennis we have seen from him in some time, who upset his more fancied opponent in straight sets 7-6 (7) 6-4. He now faces American Denis Kudla tomorrow for a place in the main draw. The two have never met before.

Luczak wasn’t quite so lucky today. Despite serving for the second set, he went down 6-2 7-5.

Ball has often showed signs of a promising future, making an ATP final in Los Angeles in 2009 (lost to Sam Querrey) and reaching a career high ranking of 108 in June 2010. However, of recent times, a series of niggling injuries and a distinct loss of form has seen him slump to a current ranking of 363.

Directly after the match, Ball was quick to comment on his form today. “This is a complete 180 from where I was at before, so I can’t be much happier.”

His opponent today, Vasek Pospisil, enjoyed his best year on tour last year, reaching a career high ranking of 121, with wins over top 50 players such as John Isner and Juan Ignatio Chela. He started 2012 brightly as well, qualifying for the main draw in Chennai less than a fortnight ago.

In discussing his opponent today, Ball was very aware of his recent success.  “He lit it up for several months, he’s been playing very well,” he said. “He’s definitely a guy that’s getting better and better.”

“I know him pretty well though, and I feel like I can go toe-to-toe with him on any given day.”

At only 24-years-old, Ball still has an opportunity to make his mark, but needs to make some inroads in the very near future.

He clearly has his sights set on making that happen. As far as his ranking, he said, “The goal is obviously double digits and higher.”

“But I’m keeping it realistic, taking it one match at a time.”

In the short term, his focus is firmly fixed on his Australian Open prospects.

“Winning two matches here and having the potential to qualify and get in the big show is what I’m here for.”

The match itself was somewhat of a battle of the giants, with six-foot-six Ball beginning sharply, his big swinging lefty serve troubling his six-foot-four opponent and giving him the chance to finish points quickly.

Pospisil was also taking care of business at his end with relative ease, and despite having to save one break point, never looked in trouble. At 5-5, a rain shower delayed play, but within an hour, the match had resumed.

Appropriately, the set quickly reached a tiebreaker. With little separating them, it was Pospisil who blinked first. At 5-5, a late fault call unsettled him and he sent the second serve into the net, handing Ball a set point. Pospisil then hit a booming forehand winner to level proceedings but Ball seemingly had the slight edge from then on, winning the set on his third attempt with a perfectly executed serve and volley point.

Ball continued the momentum into the second set with an early break to take a 3-1 lead. Both players looked to be seeing the ball well and we were witnessing some great tennis, highlighted by some awesome serving and power hitting from the back of the court by both players. It was Ball who seemed to be mixing it up a little more though, especially in taking his opportunities in the front half of the court.

Players traded breaks in the middle of the set with some unusually erratic play on both sides but at 5-4, Ball had the chance to serve out the match. He didn’t look back, with two big serves and a sweetly timed volley bringing up match point.  When Pospisil sent a return wide, Ball was through to the final round of qualifying.

Meanwhile Luczak, now a 32-year-old veteran of nearly twelve years on tour, started slowly and, despite serving well, his normally trusty baseline game wasn’t delivering, allowing Neilsen to run away with a couple of early breaks. Luczak began to find some rhythm but the Dane stayed firm and pocketed the first set 6-2.

Luczak continued to improve into the second set and for the most part, looked on target to level the match. However, at 5-2, his Danish counterpart noticeably lifted in intensity, hitting winner after winner. In the blink of an eye, he had levelled the score at 5-5 and didn’t stop there. Luczak managed to reach 0-30 at 5-6 but it was too little, too late. Some more big winners from the Dane’s racket saw him seal the deal.

Luczak was circumspect after his last ever singles outing. “Not much I could do today,” he said. “I thought Freddy played very well.”

In confirmed his retirement, he said, “That’s it. Yeah. That’s it.”

“I was actually pretty happy to win a round here as I haven’t been doing all that much practice. I’ve just been spending good quality time with the family, which is nice.”