Raonic in ominous form ahead of Australian Open

Big-serving Milos Raonic enhanced his reputation as one of the hottest young stars in men's tennis when he won the ATP Chennai Open title on Sunday in a nail-biting encounter. The 21-year-old Canadian, named the ATP's newcomer of 2011 for jumping from 156 to 31 in the rankings, overcame world No.9 and top seed Janko Tipsarevic of Serbia 6-7… 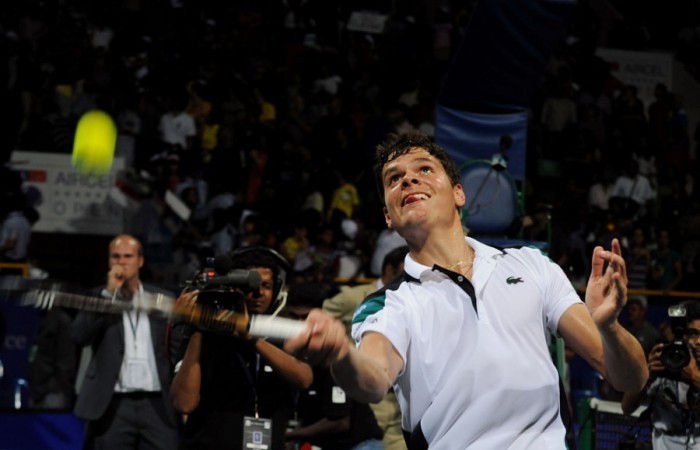 Big-serving Milos Raonic enhanced his reputation as one of the hottest young stars in men’s tennis when he won the ATP Chennai Open title on Sunday in a nail-biting encounter.

The 196cm tall Raonic blasted 35 aces against Tipsarevic’s eight to win only his second career title after a rousing final that lasted three hours and 13 minutes.

Neither player was able to secure a break in the entire match that was watched by a sell-out crowd of 5,200 at the Nungambakkam tennis stadium in the southern Indian city.

“I’ve just been on the tour for a year and am learning all the time. Here I realised that it is good to have the security of a sound serve and wait for the opportunities to come your way.

“In my three finals so far I have played in seven tie-breakers in eight sets. So I could not have asked for more when the match went my way.

“I am happy with the way I played this week on hard court. I was able to return better and served quite well. All this gives me a lot of confidence going into the Australian Open.”

Raonic came from behind after Tipsarevic had taken the tie-breaker in the first set with two superb cross-court passes that left his opponent stranded.

It was the first time that Raonic lost a set in the tournament.

Tipsarevic saved two break points in the seventh game of the second set, but it was Raonic’s turn to dominate the tie-breaker and level the match.

Raonic wasted two of the four match points he earned in the tie-breaker of the final set before converting the third when Tipsarevic netted a forehand return.

“It was a great game of tennis,” said the 27-year-old Tipsarevic after losing in the sixth of his eight career finals.

“Nobody knew till the end who would win. Unluckily for me, it was I who lost. It was just a matter of a few points here and there.

“Guys like Milos are special players. Hopefully, next time I will get the better of him.”

Tipsarevic, who broke into the top 10 for the first time last year, had lost in the semi-finals in Chennai in the last two editions.

The Serb will return to court later on Sunday partnering Indian veteran Leander Paes in the doubles final against the Israeli pair of Andy Ram and Jonathan Erlich.