Bernard Tomic says he he needs far more power to mix it with the world's best this year. 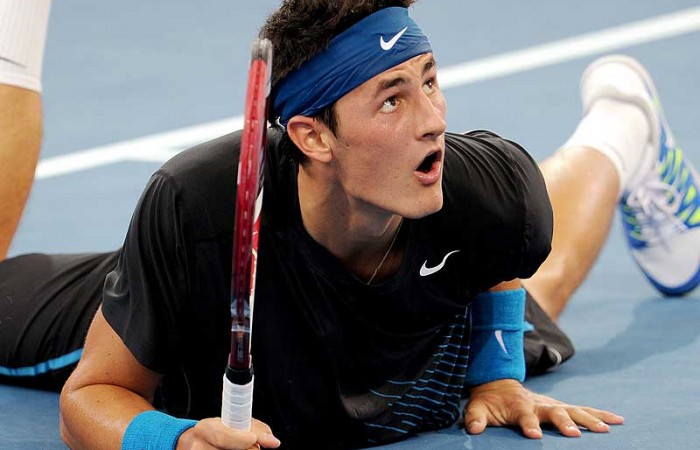 Andy Murray has no doubts Bernard Tomic will one day be a force on the ATP tour but the ever-rising teenager knows he needs far more power to mix it with the world’s best this year.

A straight sets domination by Murray on Saturday delivered a harsh reality check to Tomic who started 2012 with his first-ever semi-final finish.

No longer a spindly junior, the lanky Gold Coaster has bulked up to 92kg and used his muscle to overpower the likes of Denis Istomin, Julien Benneteau and Tatsuma Ito at the Brisbane International.

The victories will see his ranking improve to a career-best No.37 ahead of the Australian Open – a good reward for his greater maturity and strength.

But Murray showed Tomic, who immediately hit the weights in a one-hour gym session after his 6-3 6-2 defeat, he still needs to power-up further to deliver his 2012 intentions of breaking into the top-10.

“If you hit the ball hard to him, he can hit it hard back,” the 19-year-old said. “Some other players when you hit hard to them they can pop a short ball, but not the best like him.

“And he moves really good – it’s very hard hard to hit a winner.

The last of the big four – Murray, Novak Djokovic, Roger Federer and Rafael Nadal – to play Tomic, the Scot knows he’s “going to be good, you just never know how good”.

“He’s already an excellent player,” the world No.4 said. “You know he had [Novak] Djokovic on the ropes in the Wimbledon quarters.

“Had he physically been maybe a little bit stronger he could have maybe won that match.

“He’s got a big frame and he’s a big guy and so once he fills out and gets stronger he’s going to be even tougher so he’s got a good future for sure.”

The similarly towering Juan Martin del Potro believes Tomic might achieve something special as soon as this year.

Speaking ahead of his first round match on Tuesday at the Sydney International, Argentina’s US Open winner nominated Tomic and Canadian 21-year-old Milos Raonic as the two players to watch in 2012.

“I like the way Raonic plays and Tomic also,” he said on Sunday.

“There could be a surprise for this year.

“(Tomic) is very intelligent on the court. He has the weapons to be a good player.

“He’s still young but he’s working for it … he’s very young, (when) I was young, I was doing my steps very slow like him.

“Maybe this year or next year, he’ll be winning many tournaments.”

Del Potro, who stands at an imposing 198cm and nudges the scales past 90kg, appreciates how tough it can be for the bigger players on tour and has had to endure his share of injuries after his breakthrough US Open win in 2009.

But as far as movement is concerned del Potro believes his fellow tall timber has got it nailed.