Jelena Dokic has shown no mercy to fellow Australian Isabella Holland at the Sydney International. 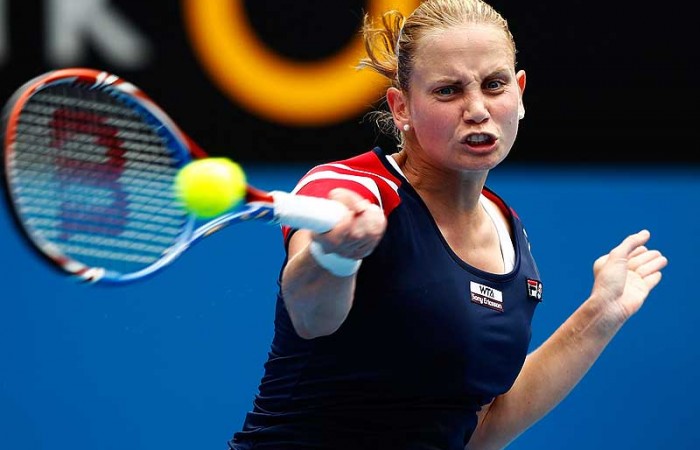 While the top-seeded players at the Sydney International enjoyed first-round byes Jelena Dokic enjoyed a practice run of her own on Sunday, routing young Australian wildcard Isabella Holland 6-0 6-0.

Dokic breezed into the second round of the WTA event with the tournament’s first double-bagel scoreline in the women’s draw in more than a decade.

In 1997 Sarah Pitkowski wiped Natasha Zvereva, also in the first round.

Things didn’t go as well for former world No.1 Ana Ivanovic, whose Australian Open preparations hit another snag when she fell to Lucie Safarova 7-6 (7-5) 6-2.

Dokic spent just 53 minutes in the one-sided contest, before revealing she still had the confidence to take on the world’s best players if she can remain injury-free in 2012.

“Look, I’ve been there. So I know I can play at that level,” she told reporters after her match.

“It’s just everything else coming together. You’ve just got to work extremely hard because everyone else is.”

Dokic said she felt some sympathy for Holland at times during the demolition, and hoped the 20-year-old would learn from the whitewash.

“But it’s sport. If I was playing someone like that, I don’t think they would take it easy on me either.

“I think you can still learn a lot from a match like this. She’s just got to go out there tomorrow and work even harder. She has potential and she’s still so young.”

Ivanovic started her match confidently as both players held serve in the first set, and even looked to have the upper hand at 5-5 in the tiebreak when she was presented with a regulation smash to bring up set point.

But instead of punishing Safarova, Ivanovic inexplicably slammed the shot into the net, before later admitting she never recovered from that error.

“I kept replaying that shot in my mind throughout the whole match,” she told reporters after the match.

Ivanovic indicated she will now head straight to Melbourne to continue her haphazard preparations for the Australian Open.

The 22-year-old was defeated in the second round of last week’s Brisbane International by Kim Clijsters, meaning she will have had just three tournament matches going into the Open at Melbourne Park beginning January 16.

“It gives me plenty of time to work on a few things and tune up a few things, but I feel my game is there,” she said.

“It’s still going to be good to have a few days to work.

“I had a good off-season and I just want to try and keep at it.

“It would be great to have a result straight away but sometimes it’s a process and it takes time.”