Andy Murray finds his form at the Brisbane International to sweep past Bernard Tomic. 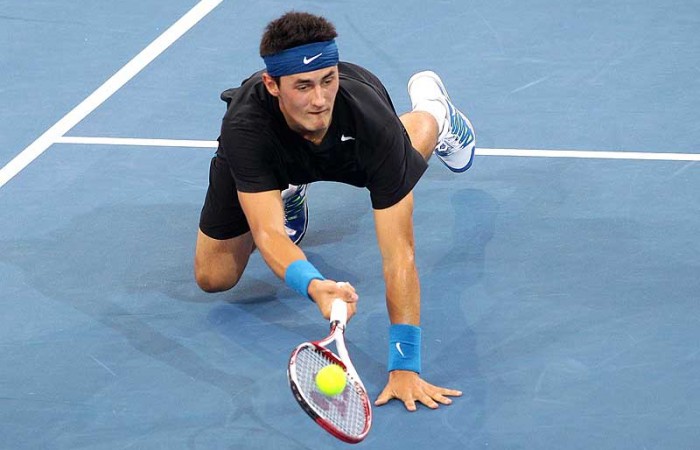 After winning every point of his first three service games, Bernard Tomic believed playing Andy Murray was a ‘piece of cake’.

But the rude shock was just around the corner on Saturday and Murray highlighted the gap is between No.4 and No.42 in the world rankings to end Tomic’s dream of a first-ever ATP final.

With Ivan Lendl in his corner for the first time, the Scot ruthlessly ended Tomic’s career-best charge at the Brisbane International 6-3 6-2 in 70 minutes.

The Gold Coast teenager started brightly on Pat Rafter Arena as he looked all the measure of the most dangerous young challenger on the tour – producing drop shots, lobs and trips to the net that all struck gold.

He didn’t lose a point on serve as the score ticked over to 3-all.

But as impressive as his first 18 minutes were, the next 18 were in stark contrast as Murray lifted a gear, took complete control and booked a place in Sunday’s final against Ukraine’s Alexandr Dolgopolov.

“It was a good match and I played solid … but Andy played much better than me and that’s why he is where he is.

“If you look at it he beat Roger (Federer) in the Masters series final 6-3 6-3 so you can’t be harsh on yourself, he just played really good.”

Despite the loss, Tomic’s world ranking will rise from 42 to a career-high 37 before he plays at the Kooyong Classic this week.

On the basis of their first meeting, Murray tipped the numbers will just keep getting lower for the Wimbledon quarter-finalist.

“He’s going to be good, there’s no question, you just never know how good,” he said.

“It depends on the body, it depends how hard you work and also a little bit of luck.

“He’s got a big frame and he’s a big guy and so once he fills out and gets stronger he’s going to be even tougher so he’s got a good future for sure.”

Last year’s Australian Open finalist had new coach Lendl in his box for the first time and now looks over the niggles that plagued him at the start of the week to be in top shape for his tilt at the Australian Open.

Tomic wasn’t helped by a minor toe injury, but world No.15 Dolgopolov had to overcome a bigger injury concern as he dug deep to defeat French second seed Gilles Simon 6-3 6-4.

The 23-year-old, coached by South Australian resident Jack Reader, feared the worst when he tweaked his groin at the start of the second set and was set to retire.

But an out-of-form Simon let the 23-year-old off the hook by not making him work harder for each point and the pain subsided.

“The first game it was hurting so hard after I pulled it that I thought I would finish in a few games,” admitted Dolgopolov, who declared himself fit for the final.