A confident Bernard Tomic has interestingly declared his half of the draw, headlined by Andy Murray, wide open. 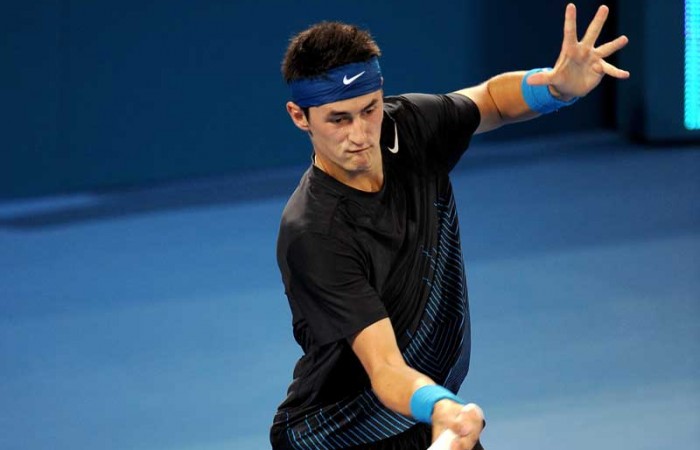 A confident Bernard Tomic has interestingly declared his half of the draw, headlined by Andy Murray, wide open as he eyes a maiden ATP semifinal appearance at the Brisbane International.

Tomic faces Uzbekistan world No.73 Denis Istomin in Friday’s quarterfinal at Pat Rafter Arena but won’t be satisfied with just setting up a meeting with Murray in the final four.

The ever-improving 19-year-old wants to make the most of a great opportunity on home soil and set a successful tone before the Australian Open.

And on the basis of his form, and that of rusty top-seed Murray’s, world No.42 Tomic would provide more than a decent challenge for a man ranked 38 places higher.

While the Scot has battled to gritty three-set wins over journeymen Mikhail Kukushkin and Gilles Muller, Tomic raced into the quarterfinals with a 6-1 6-2 drubbing of Japan’s Tatsuma Ito.

He immediately rated himself “225 times better” than 12 months ago when the Gold Coaster lost his third straight first-round match in Brisbane.

“I’ve got confidence now,” he said. “Having won first round in Brisbane has given me a lot of boost and now I think it’s open for everybody at that end of the draw, and I think I can play really well and win the next round.”

“It’s a good feeling to do it here, especially in Brisbane at the start of the year.”

But first the Wimbledon quarterfinalist must overcome world No.73 Istomin who has remarkably yet to win a completed match in Brisbane.

The 25-year-old benefited from a second-set retirement of fourth seed Florian Mayer in the first round before another injured German, veteran Tommy Haas (calf), withdrew from his second round encounter.

“He’s a great player and a great guy.

“He’s very difficult to play against.”

It’s a testimony to a beefed-up Tomic’s big improvement with his serve and movement that Istomin identified both as his biggest strengths.

The pair have never played before but Tomic is relishing the chance to slug it out and attempt to overpower another more experienced rival in his fourth year on the ATP tour.

Murray, returning from a groin strain, has grimaced his way through to his Friday quarterfinal clash with Marcos Baghdatis but his movement has improved with each set.

Second seed Gilles Simon on Thursday became the first man to win through to the semi-finals after disposing of Columbian Santiago Giraldo 7-6 (7-2) 6-4.