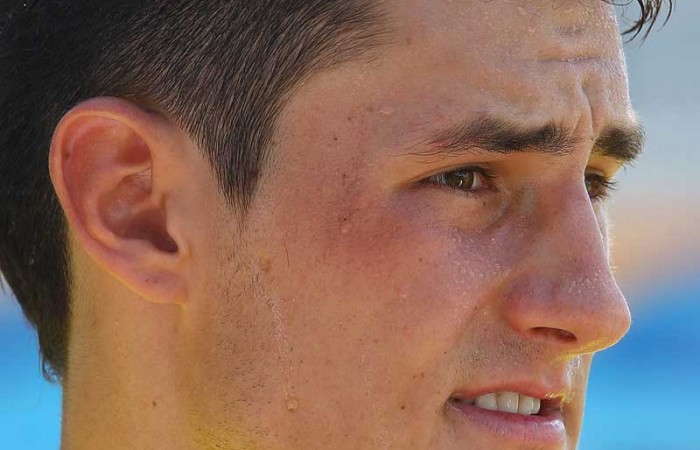 Overwhelming favourite Andy Murray has identified first-time seed Bernard Tomic as a true dangerman in the ATP draw at the Brisbane International.

Tomic has never won a match in three attempts as a wildcard at Pat Rafter Arena but world No.4 Murray has seen enough in the young Gold Coaster’s 2011 rise to believe he’ll be a threat at his “home” tournament.

The Scotsman rejected the view he’d easily take the Roy Emerson Trophy and freely nominated Tomic along with unseeded stalwarts Marcos Baghdatis and Tommy Haas among the men to challenge him.

“The first week of the year, nothing is ever a breeze. It’s always tough and you never know how a lot of guys can improve in the off-season.”

Tomic’s start to 2012 is a far cry to 12 months ago when he controversially withdrew from the Australian Open wildcard play-offs and was only granted an 11th-hour wildcard into Brisbane after another local youngster, Jason Kubler, succumbed to injury.

The 19-year-old’s breakthrough year was highlighted by his Wimbledon quarter-final run which has propelled his ranking to No.42, entitling him to eighth seeding in Brisbane following the late withdrawal of big-serving South African Kevin Anderson.

The seeding has protected him from the likes of Murray or world No.11 Gilles Simon but he’s still set for a tough first-round encounter against Simon’s French compatriot Julien Benneteau, who sits just 10 below him on the rankings at No.52.

On paper, the second round would be an easier affair with fellow Gold Coaster wildcard Ben Mitchell or a qualifier the player he’d need to topple to make a possible quarter-final against fourth seed Florian Mayer or another German in 34-year-old Haas.

Wily Czech Stepanek holds a 12-2 record in Brisbane after winning in 2009, losing to Andy Roddick in the 2010 final and making the 2011 semi-final before falling to eventual champion Robin Soderling.

Top seed Murray, who has Harrison and Cypriot world No.44 Baghdatis in his quarter of the draw, will face Kazakstan’s Mikhail Kukushkin in his first-round match on Tuesday night.

The 2011 Australian Open runner-up, struck down by a groin problem in November, dismissed any concerns about a relapse with an old knee injury after gaining treatment in practice on Friday.