Barty bound for the Australian Open 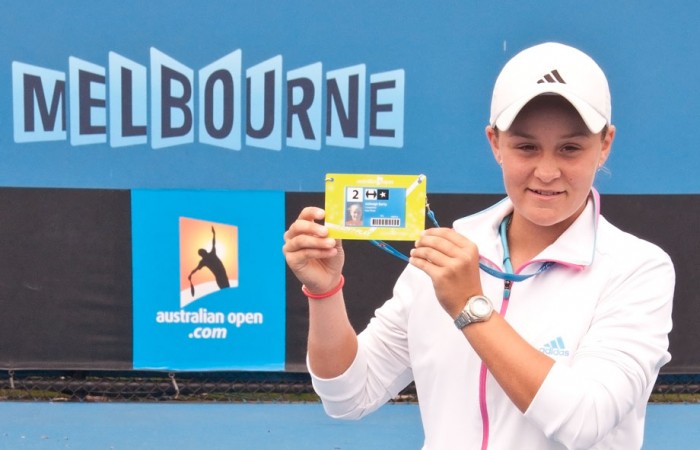 Ashleigh Barty has capped a magnificent week at the 2012 Australian Open Wildcard Play-off with a straight-sets defeat of second seed Olivia Rogowska, ensuring her entry into the main draw of a Grand Slam event for the first time in her career.

The 7-6(6) 6-2 win meant that Barty – a wildcard into the event – has gone undefeated through the play-off without the loss of a set, an extraordinary feat given the 15-year-old said she simply hoped to win a set coming into the tournament.

“I can’t describe how I’m feeling right now,” Barty told the large media contingent on Court 6 after her victory.

“I’m pleased with what I’ve done and I’ve played some really good tennis this week.”

Yet of the two players it was Rogowska who displayed the most impressive tennis in the early stages of the final, racing to a 3-0 lead on the strength of some extremely consistent and accurate play from the back of the court.

The first sign of fragility came in the fourth game, when Barty scrambled to retrieve a Rogowska shot that had hit the tape and dropped short, setting up the easiest of passing shots for Rogowska. The Victorian fluffed the shot, and Barty would eventually hold to get on the scoreboard.

Rogowska shrugged off that minor disappointment and maintained her service break advantage to move ahead 5-2, her backhand in particular firing strongly. But Barty increasingly settled into the match, drawing on the confidence she had accrued thanks to an undefeated run through the Optus 18s Australian Championships draw and in her first four matches of the wildcard play-off.

The Queenslander conjured some big forehands and some lovely touch shots as she won three-straight games to level the set at 5-5, benefiting also from Rogowska’s mounting error tally.

With scores deadlocked the standard of play lifted as both Barty and Rogowska fought for the ascendancy, and the set appropriately progressed to a tiebreak. It was a high-quality yet seesawing affair – Barty struck a vicious slice that forced the error from Rogowska’s racquet, only for the No.2 seed to respond with an ace to level at four points all.

Barty reached set point and tried to take it with a flourish, but narrowly missed her forehand down the line. She procured a second opportunity thanks to another wickedly sliced backhand that Rogowska couldn’t control, pocketing the opening set when her opponent sent a forehand beyond the baseline.

When asked about her slow start to the set after the match, Barty did not think it could be considered as such.

“I haven’t played Liv before so it’s hard to get used to her ball, but she came out really well and she was playing some really good tennis. I think I was just able to keep a little more solid towards the end of that first set and at the start of the second,” she noted.

The second set progressed routinely on serve, with Barty – naturally the more powerful of the pair – muscling an off-forehand winner and pounding down the first serves on her way to a 3-2 lead.

In the very next game, Barty’s big hitting from the baseline seemed to be wearing Rogowska down, with the Victorian committing two errors off powerfully struck Barty forehands. The Queenslander’s scrambling ability also shook Rogowska, forcing her to go for too much on a swinging volley that didn’t find the mark.

Barty snared the first break of the set in that game to move ahead 4-2 and, all of a sudden, Rogowska’s resistance crumbled. The evenly contested games and absorbing rallies from earlier in the match disappeared, as Barty grew in confidence and leaned into her shots while Rogowska increasingly struggled to find the court.

With Rogowska serving to stay in the match at 2-5, she showed she had some fight left in her, with smash and service winners helping her to 30-30. But Barty’s form was irresistible – a fabulous all-court point ensued at deuce that Barty eventually took with a forehand passing shot winner – and she wrapped up the win when Rogowska committed a final error.

The young Queenslander was presented with a large bunch of flowers and her Australian Open accreditation pass, which she jokingly said she hoped not to lose between now and January. The humour kept coming as she was quizzed about how she would approach her first ever hit-out in a major tournament.

“I think I’ll probably just keep to myself in the locker room, just stay in the corner and hide from everyone, but we’ll see how it goes.”

The wildcard play-off triumph caps a magnificent year for Barty. She won the girls’ junior event at Wimbledon and rose to an ITF junior ranking of world No.3 in August, before her outstanding success at senior level this week in Australia. She said that even just a few months since her Wimbledon triumph, everything about her game had improved.