Barty and Rogowska into play-off final 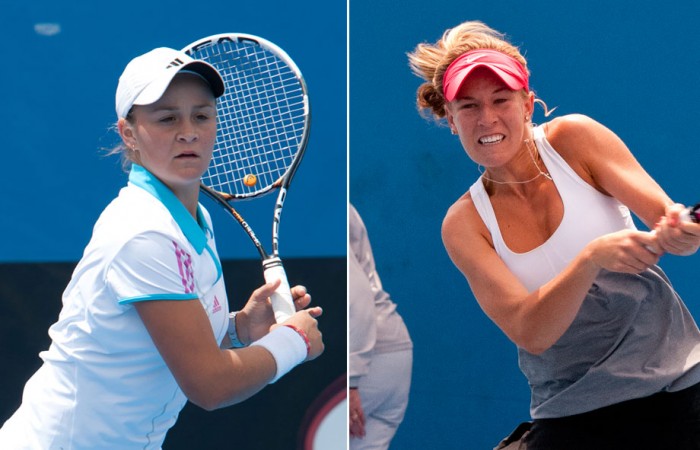 She will next take on second seed and defending champion Olivia Rogowska, who came through a tight two-set battle against Bojana Bobusic to reach her third consecutive final at this event.

The most surprising aspect of Barty’s run has not been the fact that she has reached the final, but the manner in which she has done so. In four matches the Queenslander has defeated a string of higher ranked and vastly more experienced opponents without the loss of a single set.

Entering the play-off event as a wildcard, Barty said she was surprised to even be in the tournament, let alone the final.

“I’m just pleased to win a few matches and get rewarded,” she said.

Barty carried her form from the round-robin stage into her semifinal against Rodionova. Watched by a sizeable crowd on Court 7, the 2011 Wimbledon junior champion jumped all over Rodionova’s serve to gain a break and quickly forge ahead 2-0.

Barty lost her advantage when Rodionova broke back and later held to level scores at 3-3. The naturalised Australian citizen used the gusty conditions to her advantage, successfully employing her drop shot on several occasions that stopped dead for winners.

The set progressed to 5-5, and Rodionova ramped up the power in the next game, smacking a number of winners on her way to a 15-40 lead.

And showing maturity and poise beyond her years, Barty held firm. Playing steadily from the baseline before acing Rodionova to level scores at deuce, the Queenslander went on to hold serve, and broke in the next game – thanks to a bundle of errors from the former Russian – to take the opening set.

Barty began the second set in exactly the same fashion as the first. Yet Rodionova again responded, and with several games going to deuce, Barty was forced to save break points in the fifth game. She did so with a flourish – an off-forehand winner and an ace helped her to deuce before she eventually held for 3-2.

Her impressive response seemed to break Rodionova’s spirit. As errors increasingly crept into the game and her body language worsened, Barty pounced, smacking her forehand with authority to break for 4-2, and holding strongly in the next game to consolidate.

Rodionova did force Barty to serve for the match when she held for 3-5, but Barty made no mistake, pounding service and backhand winners for a 40-15 lead and clinching a 7-5 6-3 win with a volley into the open court.

Despite the result being a milestone in her young career, Barty was taking a low-key approach into the final.

“I haven’t really thought about it yet. I’m just going to go home, relax this afternoon and think about it tomorrow,” she said.

“I’m not too fussed about who I play. I just know it will be a good match.”

Her opponent was decided just a few minutes later on Court 5 when Rogowska rifled a backhand winner up the line past the net-rushing Bobusic to win their match 6-4 7-5.

It was certainly the more gruelling of the two semifinals, with the pair evenly matched and slugging out several deuce games before Rogowska finally gained the upper hand.

The No.2 seed said that it was difficult to take on an opponent who was similar in style, strategy and stature.

“It was only a couple of points here and there,” Rogowska noted.

“Bojana plays very similarly to me – [hits] flat, runs really hard, great returns – so it’s just a matter of who stays more positive, calm and confident, and I felt like I played well on those big points and that’s what helped me get through.”

The gritty tone of the match was set in the marathon fifth game of the opening stanza. Rogowska stared down several break points – saving one with a well-placed forehand winner – before gaining a confidence-boosting service hold and 3-2 lead.

Another gruelling game followed with Rogowska serving in the seventh game, before the Victorian again held her nerve – and serve – to keep her nose in front at 4-3.

Games progressed on serve until the 10th game, in which Rogowska held three set points with Bobusic serving. The second seed finally clinched the first set on her fourth set point after a poorly timed double fault from the West Australian.

The opening stages of the second set were characterised by several service breaks, with both players struggling to adjust to the swirly conditions and glaring sun, particularly at the southern end of Court 5.

Bobusic, the fifth seed, broke serve to lead 5-4 but put in a shocking game when serving for the set, broken to love after dishing up a double fault and then a backhand error.

It was the momentum swing that Rogowska was hoping for. The Victorian capitalised, executing a lovely wrong-footing off-forehand on her way to holding for 6-5, and clinched the win in the very next game on her first match point.

Rogowska said that during the match she thought how awesome it would be to play in the play-off final once again.

“It’s such a great atmosphere, lots of people come to watch and it’s streamed live, so it’s great practice for January. So it should be fun [tomorrow],” she said.

Rogowska and Barty are roommates this week and are both members of the Australian Institute of Sport. They get along well and know each others’ games having hit together many times before, but Rogowska says they are yet to play a competitive match.

“She [Barty] is playing really good tennis. She’s going out there with nothing to lose, and they’re the most lethal kind of players. So I’m just going to go out there and just try and forget who I’m playing and focus on myself and my game plan,” Rogowska said.

“She’s a very solid competitor and I’m going to have to play some top tennis to beat her.”

Tomorrow’s women’s final will begin at 11:00 am and will be streamed live on tennis.com.au.