Wheelchair tennis will enjoy a significant boost in Australia in 2012 thanks to the new Australian Wheelchair Tennis Tour, which will kick-off in January. 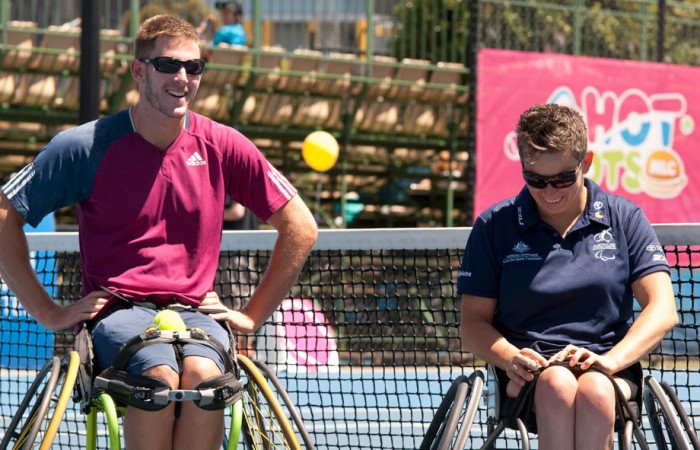 Wheelchair tennis will enjoy a significant boost in Australia in 2012 thanks to the new Australian Wheelchair Tennis Tour, which will kick-off in January.

The tour will offer significant points and prize money and, being just months out from the 2012 London Paralympic Games, it is expected to attract the world’s best players who will be chasing valuable Paralympic qualification points.

The tour will see upgraded events in Brisbane, Adelaide and Melbourne, with the Sydney event upgraded to Super Series status – making it a highly prestigious event – and will conclude with the invitational Australian Open.

Such a streamlined and integrated wheelchair tennis tour is a world first, and women’s world No.6 Daniela di Toro says it is the first time that Australian wheelchair players can access this high standard of events in their home country.

“This is the first time we have access to greater points, which allows us to improve our ranking, and more cash which also then allows us to do more travel,” she said.

“That [opportunity to enter these events] is actually given to every single player. For us the big prestigious event is the Australian Open, which is only a top-eight event, yet no-one else can access that, and outside of that we’ve only ever had very small tournaments with very little prize money or points, so [the new tour] really elevates wheelchair tennis in this country for everybody.”

Di Toro spoke at the launch of the new tour at Melbourne Park on Thursday, which was staged on Court 4 and included speeches by Tennis Australia’s Director of Tennis Craig Tiley, Tennis Australia National Wheelchair Tennis Coach Greg Crump and the Australian Paralympic Committee’s General Manager for Sport Michael Hartung.

The event was conducted in front a number of school groups before concluding with a short exhibition match between di Toro and fellow Australian Ben Weekes, the men’s world No.13.

Wheelchair tennis events have always existed in the lead-up to the Australian Open wheelchair tournament, but the new tour is the first official tour that offers such prize money and points to players, as well as world-class playing facilities and tournament status upgrades.

“The best thing about the tour is that there are five [events] in a row that we can play, whereas usually we have to go overseas for three weeks and have to come all the way back to Australia … every kind of trip we had to make ended up being a massive deal,” he said.

“[The new tour] will attract all the players from overseas to come over, because in the past we’d only get a handful of the top guys coming over but now everyone’s going to want to come out for that and the extra ranking points.”

The new tour has been made possible thanks to a partnership between Tennis Australia and the Australian Paralympic Committee.