Casey Dellacqua stepped out on court today for her final round-robin play-off match against Stephanie Bengson looking a picture of health. 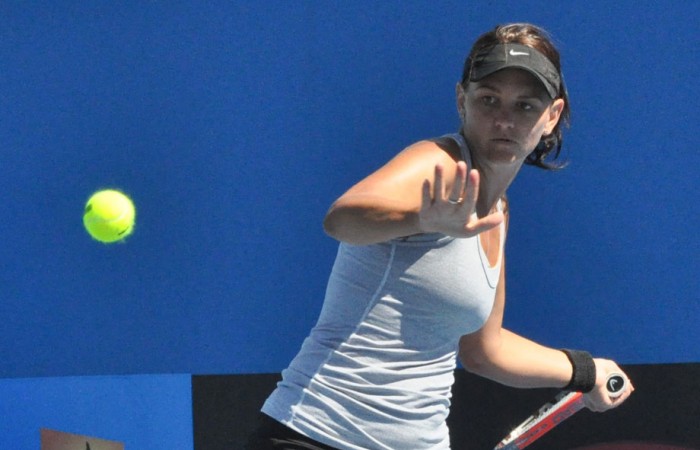 Casey Dellacqua stepped out on court today for her final round-robin play-off match against Stephanie Bengson looking a picture of health.

The West Australian has had an incredible run in recent times, racking up a string of wins on the Australian Pro Tour before finally succumbing to Wimbledon junior champ Ash Barty in the first match of the play-offs earlier this week.

While that loss means she won’t progress to the play-off semifinals after Barty won her third and final round-robin match, Dellacqua has certainly bounced back. Yesterday she dismissed Emelyn Starr for the loss of only one game and today she swept past Bengson 6-2 6-2 in a very controlled display.

Dellacqua is extremely happy with her current form and is circumspect about that loss to Barty and her early departure from the play-offs. “I was eventually going to lose,” she said. “It’s inevitable.”

“To be honest, I have had one bad day in the last three months.”

“I’m really happy with where I am at,” she continued. “I’m hitting the ball great, serving well and doing all the things well. I feel good and I am looking forward to the summer.”

On the possibility of cracking the top 40 again, Dellacqua says it’s hard to predict. “I got there previously, but I feel like I am a completely different player and person now.”

Ending last year ranked 133, Dellacqua says the difference is in her maturity. “I’m 26 now [and I have] more perspective on the game.”

“I’m older and wiser, and I know the right things to do.”

“I’ve got a lot of matches under my belt in this part of the year and that’s really set [me] up for next year. Top 100 is my first goal and once I’m back inside there, we will just see what happens.”

In her match against Bengson today, Dellacqua opened strongly, jumping out to a 3-0 lead, taking advantage of a slightly shaky start by her opponent and immediately keeping her under the pump.

Bengson then managed to hold serve thanks to an extremely lucky net cord dropping into play but this just seemed to fire Dellacqua up, as she held to love to lead 4-1.

At that point though, Bengson appeared to loosen a little, and her big serve and strong ground strokes looked like they might just begin to get rolling. She held for 4-2 but Dellacqua still looked extremely comfortable out in front and eventually took the first set 6-2.

The second set was much the same. The steady play of Dellacqua was too much for Bengson who, despite some glimpses, seemed a little too inexperienced and erratic.

At 3-0 up, however, Dellacqua dropped her focus ever so slightly and for a couple of games looked as though she might let Bengson back into the match. She made some uncharacteristic errors, double-faulted to drop serve, and then allowed Bengson an easy hold.

The ship was quickly righted though, and with the normal programming resumed, Dellacqua ran out an easy winner.