Up-and-comer Ashleigh Barty had little trouble progressing to the knockout stage of the 2012 Australian Open Play-offs after taking out eighth seed Emelyn Starr 6-3 6-2. 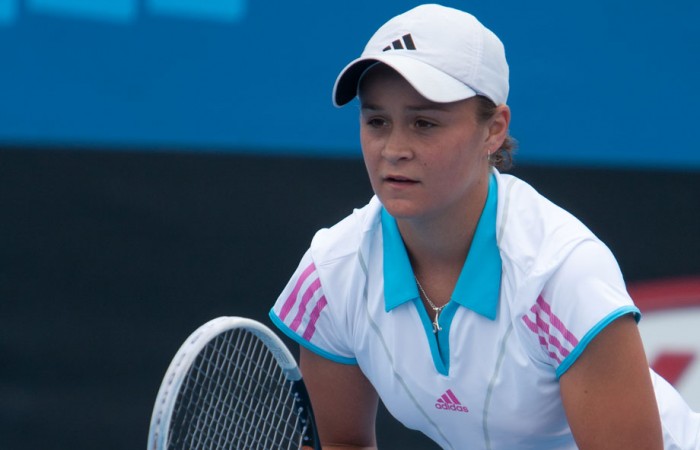 Up-and-comer Ashleigh Barty had little trouble progressing to the knockout stage of the 2012 Australian Open Play-offs after taking out eighth seed Emelyn Starr 6-3 6-2.

Around 80 spectators looked on as the young 2011 junior Wimbledon champ dictated much of the play and surged past the round-robin draw in impressive style.

But the win also has great implications for top seed Casey Dellacqua, who now bows out of the event after falling to Barty in straight sets on Tuesday.

Despite clear skies, Barty said gusty winds and an unforgiving sun made conditions difficult to play in.

“It was tough out there today,” she said.

“It was a little bit windy, the sun was pretty bad at one end but I was able to put my game together just long enough to get the win.”

After three consecutive straight-sets wins in the round-robin draw – including a 6-3 6-3 victory over Dellacqua – Barty said she never really expected to make it this far.

“Honestly I just wanted to see how I went,” she said.

“I was just looking out here to have fun … [but] now I’m in the semifinals, it’s going to be great.”

Barty asserted her authority early, snagging a quick break and holding serve via some superb groundstrokes pushing Starr around the court.

The Queenslander’s booming first serve was causing major headaches for Starr, who struggled to maintain good court position and was forced to play defensively.

But Barty’s flawless campaign at Melbourne Park didn’t translate into a flawless game, with the 15-year-old giving away a handful of free points through some costly unforced errors.

Starr broke serve in the seventh game taking the score to 5-3, sending a message to her powerful opponent that the game would be no walkover.

But her work was immediately negated one game later after Barty broke back, putting her errors behind her and powering forward to take out the first set 6-3.

Play was on serve to start the second set as Starr kept fighting, refusing to give her opponent any real chance of blowing the game out.

A shanked return at 1-1 saw Starr narrowly miss the chair umpire’s head as Barty held serve, but didn’t appear to have the control she possessed in the opening set.

Barty’s first signs of frustration were on display in the sixth game after more costly unforced errors, but all she offered the crowd was a simple hand in the air to signal her displeasure.

Up 40-0 and serving, Starr was looking to level the scores at 3-3 until her younger opponent kicked into a new gear, winning five consecutive points and stealing the crucial break.

From then it was all Barty, who continued to drill the ball flat and deep running Starr off her feet and took out the final set 6-2.

After a stellar couple of weeks, Barty played down her chances of making the main draw of the Australian Open and said she wasn’t certain if she was ready.

“I can’t tell you when that’ll be but I’ll just keep developing and see if I ever get there.”

After both players cruised through their opening two matches – neither coming close to dropping a set – the equation was simple: win to stay alive.

It was Rodionova who prevailed, overcoming a huge brain fade in the second set to win 6-3 0-6 6-4.

Rodionova’s swift forehand winner across the court in the opening point set the tone for the Victorian as she quickly powered to a 2-4 lead.

Some unnecessary errors frustrated the 21-year-old, who often tried to get herself going by jumping rapidly on the spot.

A monster forehand winner down the left sideline followed by an even bigger first serve saw Rodionova take out the first set 6-3, but her game went downhill from there.

Holland was able to crack Rodionova, who became increasingly rattled by her poor groundstrokes and overall play.

Holland began steamrolling her opponent, breaking serve with ease and surging through the second set to take it 6-0.

But Rodionova showcased her mental toughness and prevented a complete disaster by picking herself up in the final set.

After an epic opening game, Rodionova was able to finally steal the break after a handful of attempts and grabbed her first game since the end of the opening set.

Up 2-0, Rodionova had three break points and was looking to run away with the match, only to commit consecutive unforced errors prompting a sarcastic Rodionova thumbs-up to herself.

But Holland failed to maintain her concentration as she began to wilt, handing her opponent free games off the back of sprayed shots and crucial double faults.

In the end it was Rodionova who came away victorious, taking the final set 6-4 and advancing through to the knockout draw.