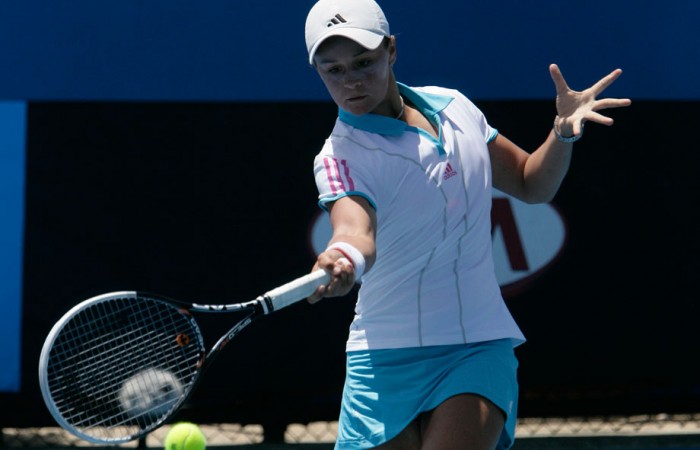 The 15-year-old Wimbledon junior champion looked like a seasoned professional against the vastly more experienced Dellacqua, racing through the match thanks to service breaks in each set to record a 6-3 6-3 victory.

Barty said she was not expecting to beat the former world No.39, going into the match simply with the aim of enjoying herself.

“I think I played very well today. I know Casey didn’t play her best but I’m just pleased to get the win,” she said.

“Once I got that first set I was over the moon, so I just wanted to keep that roll going and see how I went.”

Barty began the match confidently, expertly working the ball around the court while Dellacqua’s game was plagued with errors.

The Queenslander moved ahead an early service break, but in the seventh game Dellacqua broke back and appeared to be steadying the ship.

Not so. The top seed struggled with her serve in the next game, offering a healthy dose of second deliveries which Barty happily feasted on. She created several break-point opportunities and was eventually rewarded for her efforts, breaking serve again and then confidently serving out the set.

Dellacqua, who entered the contest riding a 30-match winning streak through six consecutive Pro Tour titles, could not summon that form in the second set. She immediately found herself on the back foot once again when Barty scored the first service break of the set.

In fact, the 15-year-old looked set to dish out an absolute pasting when she lead 1-3 0-30 after Dellacqua sent a smash long over the baseline. But the top seed staged a mini-revival, holding serve in that fifth game to keep the set competitive.

Barty preserved her service break buffer – showing great composure to hold serve in a torrid eighth game – and soon moved ahead 5-3 with two monstrous forehands that pulled Dellacqua well off court, the second forcing an error off the West Australian’s racquet.

Just minutes later, Barty broke serve again to complete a comprehensive victory. She said the win would not cause her to reassess her prospects for success in the play-off.

“I just came into the match going out there to enjoy it. I’m not too worried about the score at the moment [in this event] so I just came out here wanting to enjoy it and have fun,” she said.

“We didn’t really have a game plan [coming into the match] so I was just out there seeing what would work and what didn’t, and I was just having a ball.”