Age no barrier for Mott

Update 5:40 pm. Exciting young prospect Blake Mott has gone down in the first round of the Australian Open 2012 Play-off, falling in three sets to Gavin Van Peperzeel. 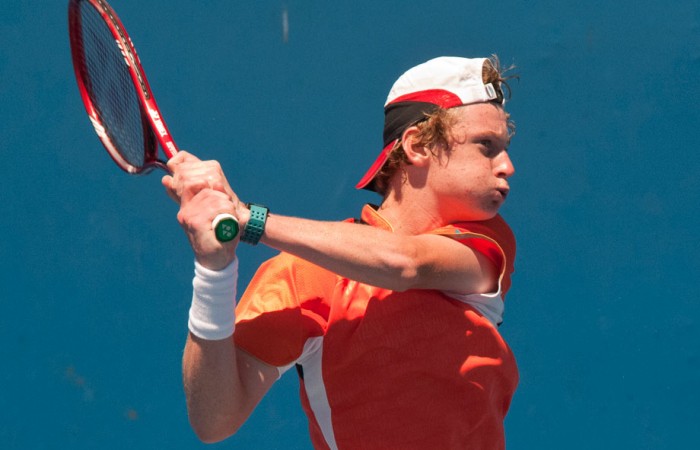 Exciting young prospect Blake Mott has gone down in the first round of the Australian Open 2012 Play-off, falling in three sets to Gavin Van Peperzeel.

Despite going down, the 15-year-old acquitted himself impressively throughout the match, breaking Van Peperzeel’s serve when the Queenslander served for the opening set and saving three set points before eventually surrendering it.

He powered through the second set with an impressive display of consistent counterpunching and clever offensive moves before falling behind a break in the third – a deficit from which he could not recover – to ultimately fall 7-5 3-6 6-3.

Against a player four years his senior, Mott says there were some positives that he could draw from the match.

“I was pretty happy. He played well when he needed to … I was 3-2 [up] in the third and had a bit of a chance, I just didn’t jump on top of it. I could’ve knuckled down for a game but I just didn’t. [I] lost a bit of focus, probably from the duration,” he said.

“I was down a break in the second set but I came back and won it, which was good. So I was pretty happy, but a bit disappointed I couldn’t get there in the end.

“He played well to his credit and I wish him the best tomorrow.”

Mott was the youngest player in the play-off draw, but came in with plenty of experience against older stronger opponents after cutting his teeth on the Futures circuit throughout 2011. He picked up his first ATP points to be currently ranked world No.1306.

He says the decision to play senior tennis – which has taken him to far-flung locations such as Serbia, Finland and Israel – came after noticing that several ITF junior players have struggled to make the transition when they take on senior players. “The best thing is that you hit with great players on the circuit [and] you just get better and better,” he said.

“[You are] playing tournaments week after week, a lot of matches, hitting with good people, and just being around adults, which I think is the key for me.”

Mott feels this has lead to rapid improvement in his game, and says that this time last year, he never would have expected to be taking part in the AO Play-off.

Another key to his improvement has been his work with former world No.1 Lleyton Hewitt, who was on Court 7 watching much of today’s match. Mott cites Hewitt as his idle and appears a miniature version of the Australian icon, right down to the Yonex-branded clothing and racquet and cap turned backwards.

He says the intensity of the training is excellent for his development, and that he is grateful to Hewitt for hitting with him.

“He’s just been working me hard with Rochey [Tony Roche]. I’ve definitely learned a lot from him in terms of the way he works and attitude-wise. I was really nervous at the start, but I’m getting better and better,” he said.

Now that he’s out of the play-off, Mott will turn his attention to the upcoming Australian summer events in 2012. His plan is to play the juniors events at Traralgon and the Australian Open, and then return to Europe in mid-February.

He says his match again Van Peperzeel today has helped him understand what he needs to focus on with his game.

“I probably just need to get a bit stronger, and just learn and play the big points better … I made a few loose errors [today] when I should have made some [shots],” he said.

Harris was down a set and a break on Court 5 before fighting back, breaking back and then holding serve to move ahead 4-3 in the second.

But it would prove to be the last game he would win – the more experienced and powerful Propoggia powered through the ninth game in holding to love, and then resoundingly served out the match to win 6-3 6-4.

He will next play sixth seed James Lemke.

At the same time on Court 8, Isaac Frost was powering his way past another good performer in last week’s 18s event, this time finalist Andrew Whittington.

Frost’s booming serve and power from the back of the court proved too much for the youngster to handle, and he moved through to the second round of the play-off with a 7-5 6-3 win.

The victory sets up a clash with No.8 seed Michael Look.

Luke Saville has avenged his loss to Chris O’Connell last week in the Optus 18s Australian Championships with a a hard-fought three-set win. Saville had to come back from a set down to fight his way into the second round, winning 2-6 6-4 6-4. The win means Saville will play fifth seed James Duckworth for a place in the quarterfinals.