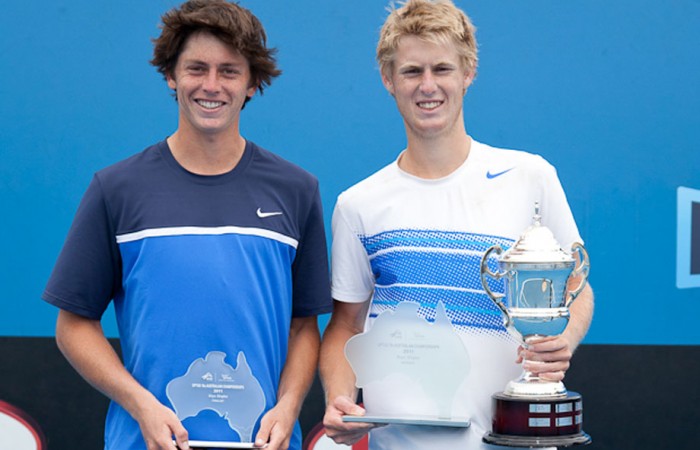 Luke Saville has claimed the Optus 18s Australian Championships title after an epic battle against third seed and good friend Andrew Whittington, battling for just shy of three hours before completing a 7-6(5) 5-7 6-2 victory.

The win caps a magnificent year for the South Australian, highlighted by a victory at the Wimbledon junior championships and an ITF junior ranking of No.2.

Despite his great form and stellar results throughout 2011, it was by no means Saville’s best performance. Neither was it Whittington’s. Their final was characterised by several errors, double faults and missed opportunities, and Saville said he was just thrilled to tough out a win.

“It really could have gone any way … [they were] not easy conditions out there,” he commented.

“It was an ugly match, but sometimes it’s better winning those tough three-setters when you don’t play your best tennis, they’re probably the most thrilling wins.”

It appeared the top seed was headed for an easier victory in the early stages of the first set, comfortably holding serve and pressuring Whittington’s delivery on his way to scoring the first break in the fifth game. Yet Saville immediately surrendered his advantage, setting the tone for the match.

With many games turning into torrid battles that featured several deuces and break-point opportunities, the set appropriately progressed to a tiebreak, with the drama and the tension levels high after several line-call disputes.

Whittington scored two mini-breaks but could not capitalise, and Saville secured the first set after more than an hour thanks to his willingness to hit out boldly and force the errors from the third seed’s racquet.

In the second stanza it was Whittington’s turn to gain the early advantage, breaking serve in the fifth game – having earlier survived multiple break points in his own service games – to take a 3-2 lead, which he soon consolidated.

Yet when Saville held in the next game, Whittington began to look hobbled by injury, limping and seeming to favour his left leg. When the No.1 seed broke back to level at 4-4, the match looked headed to a conclusion.

Against the tide, Whittington broke serve to love in the ninth game. Now it was Saville suffering, clutching his lower back after dishing up a double fault to drop serve. It came as part of a run of four service breaks – an intense period that saw more vociferous protesting over close line-calls – that eventually ended when Whittington held serve in the 12th game to take a torrid second set.

Heading into the third, it appeared Whittington had the bulk of the momentum. But Saville said he did not see it that way.

“I just had to regroup mentally … I was always in the match, and I was just happy to get that break and get another break at the end which saved me serving it out into the wind, because I didn’t have too much success doing that today.”

Saville was indeed dominant on the return, breaking in the fourth game. He then consolidated this in the fifth game thanks to a brilliant running forehand that he flicked, squash-style, past a dumbfounded Whittington at net, drawing applause from the sizable crowd on Court 6.

He broke serve again in the final game, volleying a winner to reach 0-30 and then benefiting from an error and a double fault from his opponent to close out the match in two-and-three-quarter hours.

“I hung in there and stuck it out to the end and he crumbled a little bit, which I was thankful for – I needed a bit of help at the end because he was playing some great tennis,” Saville said.

The South Australian said the back injury was nothing too serious.

“I’ve had a long and gruelling last couple of months, I’ve played a lot of matches … body probably needs a bit of rest tomorrow … I’m feeling good, just get a bit of massage on that and it should be fine on Tuesday,” he said.

“I’ve got some great momentum going into that and I’m really excited to be playing the play-off for the second year running.”