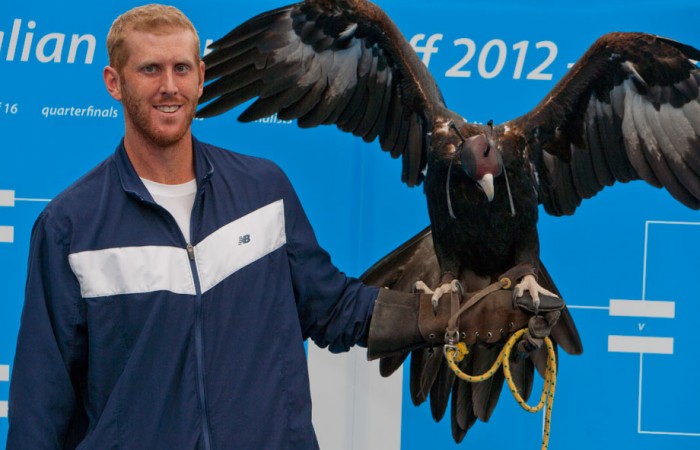 Hosted by Tournament Director, Frankie Soyer, who was joined on stage by the top seeds from the men’s and women’s events in Greg Jones and Casey Dellacqua, the ceremony also featured Tin Tin the barn owl and Sabrina the wedge tail eagle.

The women’s play-off draw was completed first. This year, 16 women will compete in four round-robin stages, each made up of four players, with the winner from each advancing to the semifinals.

With Tin Tin taking centre stage to deliver the players names to Casey Dellacqua, we saw the draw take shape with Casey’s Blue Group offering up a tantalising match-up between her and junior Wimbledon champ, Ashleigh Barty. Others in the Blue Group include Emelyn Starr and Stephanie Bengson.

Second-seeded Olivia Rogowska heads the Magenta Group which includes Optus 18s semifinalist Azra Hadzic and Belinda Woolcock, who will seek to reverse the tide against Hadzic after losing a close encounter to her in their Optus 18s quarterfinal. Making up the Magenta Group is Daniella Jeflea.

The Yellow Group is led by fourth seed Sally Peers and includes Bojana Bobusic, Optus 18s finalist Storm Sanders and Viktorija Rajicic, who will also try to get one back against her previous vanquisher, as it was Sanders who defeated her in an Optus 18s semifinal last week.

Next, it was over to the men’s draw, a 32-man field with the top eight seeds offered first-round byes. At this point, Greg Jones took up the mantle with our resident owl, Tin Tin.

When all was said and done, the bottom section of the draw looked to be the most dangerous with second seed Marinko Matosevic and Sam Groth set to meet in the second round. Others in that section include powerful young gun Alex Bolt, John Peers and junior Davis Cup team member Nick Kyrgios.

Other interesting first-round matches include John Patrick Smith and Maverick Banes, with the winner to play Chris Guccione, and Wimbledon junior champ Luke Saville to play Optus 18s surprise semifinalist Chris O’Connell who easily accounted for Saville in the round-robin stage of the Optus 18s. Again, as per some match-ups in the women’s draw, the opportunity for revenge will be high on the agenda. The winner of that match will take on James Lemke.

At the completion of the draw, top seed Greg Jones was circumspect. “There are a lot of good players, so it’s always going to be tough,” he said. “There are some young guys [in my section of the draw] that I don’t know much about.”

In earlier proclaiming the bottom quadrant of the draw the “section of death,” Jones said that Sam Groth was always going to be a dangerous floater. “Grothy has had a few injuries this year and [he] is trying to make a comeback.”

“Sam is probably someone most of us were trying to avoid, unfortunately Marinko [Matosevic] wasn’t so lucky.”

Jones has a lot on the line in this event. If he can take it out, it will be his first time in the main draw of a Grand Slam. “So there’s a lot of incentive,” he said.

Both events look set to provide some entertaining tennis and with a wildcard to the Australian Open 2012 main draw on offer for the winners, nothing will be left on the table.