The 2011 Wimbledon junior champions were in full flight at Melbourne Park this morning, with Ashleigh Barty and Luke Saville both progressing to the Optus 18s Australian Championships finals thanks to straight-set victories. 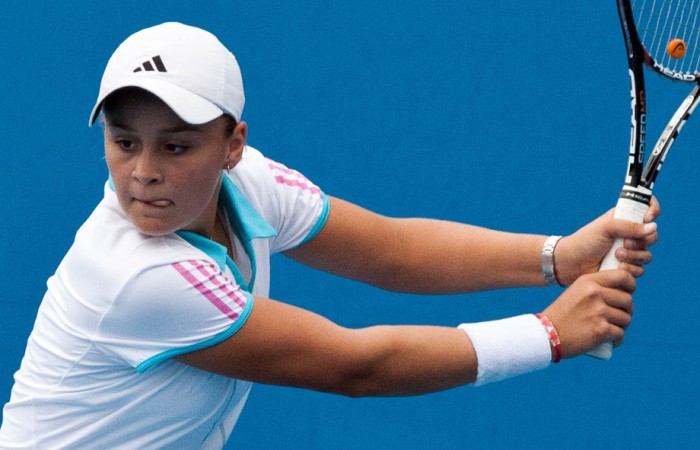 The 2011 Wimbledon junior champions were in full flight at Melbourne Park this morning, with Ashleigh Barty and Luke Saville both progressing to the Optus 18s Australian Championships finals thanks to straight-set victories.

Barty, the top seed in the girls’ event, hit the ground running in the opening stages of her match against No.3 seed Azra Hadzic on Court 6, slamming down two aces in the first game and using her big forehand to gain an immediate service break in the second game.

Hadzic was able to get on the board with the help of some slice-backhand errors from Barty in the fourth game, but the 15-year-old Queenslander simply had too much game, continuing to pound her first serves and forehands on the way to taking the first set.

Things looked more promising for Hadzic at the beginning of the second set – she broke serve to lead 2-0 thanks to a flurry of Barty errors.

“She didn’t consolidate that break so I think that was very important,” Barty said after the match.

“She definitely picked up her game and I dropped off a little bit, but I was able to pick it up in the end and I felt I was a little bit better out there today.”

Indeed she was. Barty rediscovered her booming forehand in the third game, reeling in the Victorian’s lead on her way to capturing six straight games and the match, 6-3 6-2.

“I’ve played Azra a few times and it’s always a tough match, so I’m just happy to get through without being on court too long,” Barty said.

“This is my first tournament back for a couple of months, so I’m just pleased to get a few matches, and hoping to play well tomorrow.”

Her opponent will be the winner of the second semifinal between second seed Storm Sanders and No.5 seed Viktorija Rajicic.

At the same time over on Court 7, Saville was proving too strong for No.5 seed Andrew Harris, playing what he described as a “flawless” opening set on his way to establishing a commanding lead in the match.

His dominance was reflected in an entertaining point in the sixth game, scrambling a lob over the advancing Harris’s head and then rifling a backhand down-the-line off the solid forehand reply.

“I came out firing in the first set, and I think it’s only natural, I don’t think I could have kept that level going for the whole match. I dropped maybe slightly and he picked it up a little bit,” Saville reflected.

“It was a big occasion for both of us, and obviously I was going to expect Andrew to come out a lot tougher in the second set, he’s a great fighter and a great player.”

Harris indeed acquitted himself better in the second set, surviving an early onslaught from the top seed to get on the board in the third game, and he eventually went game-for-game with Saville for the remainder of the match.

But the damage had already been done when Saville scored a break in the opening game of the set, and he simply had too much power and consistency from the back of the court for the Victorian to handle.

Saville completed a 6-1 6-4 victory and said he was bringing excellent form into the final.

“It was a pretty miserable day in the second round [losing in straight sets to Chris O’Connell],” he said.

“I’m really happy with how I’ve rebounded, I’ve won three matches fairly comfortably in straight sets since then … so I’m really excited for the final.”

He will next meet either O’Connell or third seed Andrew Whittington.

Stay tuned for more updates in the other semifinals later in the day.