Update 5:35 pm. Day two of the 2011 Optus 18s and 14s Australian Championships continued today at Melbourne Park despite poor conditions disrupting much of the action. 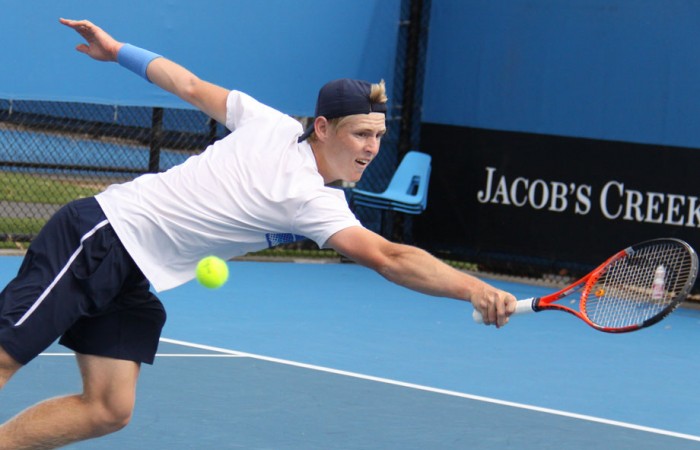 Many matches didn’t even start thanks to the intermittent rain. Unfinished matches will be rescheduled to Thursday.

In the 18s event, NSW’s Chris O’Connell made light work of top seed and junior Wimbledon Open champ Luke Saville with an upset 6-2 6-2 win that not many saw coming.

But O’Connell is no stranger to upsets after overcoming seventh seed Andrew Mcleod yesterday in straight sets, carrying his strong form into today’s play.

After taking out the first set convincingly against Saville, O’Connell was up 4-2 in the second but down 0-40, facing three break points.

But he kept his composure and won the next five consecutive points, holding serve and eventually taking out the match.

“I got on top pretty early and I closed [the game] out. It was good.”

The strong left-hander outmuscled his opponent and constantly kept Johnson on the back foot with deep groundstrokes, taking advantage of a string of unforced errors late in the game to break serve and steal victory.

Bolt said he came into the match with a clear game plan, using his big slider serve to try and grab some easy points.

“I like the slider T/slider wide serves and that’s quite effective against a right-hander with a double-handed backhand, getting him reaching, maybe taking one hand off so I can get that easy first shot of the point,” he said.

Sixth seed Ben Wagland’s clash with South Australian qualifier Li Tu was postponed due to persistent rain, with Wagland holding a 3-1 lead over his younger opponent.

Tu was in blistering form, qualifying for the 18s on Monday and knocking off fourth seed Mark Richards yesterday in straight sets, but struggled early against a much stronger Wagland.

Wagland kept his shots deep allowing him to play up the court and attack the sidelines. After taking an early 3-0 lead, Tu eventually held serve in the fourth game but was denied any real momentum as play was quickly stopped.

The 14s event was also played today with only a handful of matches completed due to the rain.

There were few upsets with most seeds winning in straight sets.

Top seed Sara Tomic – sister of Bernard – was too much for Brooke Milner, coming away with a 6-1 6-3 win and looks to be in solid form after another straight-sets victory  yesterday.

Eighth seed Kimberly Birrell, ninth seed India Warren and 10th seed Noelleda Ah San all put the blustery winds behind them and blasted their opponents off the court, losing only three games between them.

Third seed Olivia Tjandramulia will also be looking to get back on track against Alexandra Taylor when play continues after going down to Destanee Aiava 6-3 6-4 yesterday.