Storm calm in the heat at Optus 18s

The 2011 Optus 18s Australian Championship began in earnest today at Melbourne Park with the humid and blustery conditions providing plenty of challenges. 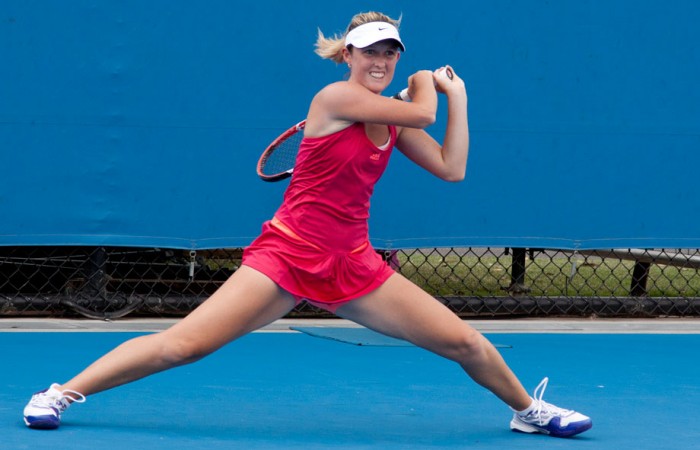 The 2011 Optus 18s Australian Championship began in earnest today at Melbourne Park with the humid and blustery conditions providing plenty of challenges.

The event kicked off with the 16-player round robin stage of both the boys’ and girls’ draws and the format immediately provided us with some upsets, with two of the top four boys losing their first-up matches.

It was yesterday’s qualifiers doing the damage, with South Australian Brad Mousley taking out his SA compatriot and second seed Alexander Bolt in a see-saw three-set encounter while fourth-seeded Queenslander Mark Richards went down in two relatively easy sets to another qualifier in Li Tu.

Top seed and reigning Wimbledon boys’ singles champion Luke Saville managed to survive his encounter with NSW’s Jay Andrijic, but even he had a battle on his hands after losing the first set 6-3. In the end though, he managed to regain his composure and take out the final two sets 6-4 6-1.

In other results, local Victorian hopes Andrew Whittington (No.3) and Andrew Harris (No.5) were too strong for their respective opponents in Nicholas Kyrgios (ACT) and Calum Puttergill (Qld) – Whittington needed three sets while Harris got the job done in straight.

The girls provided some exhilarating tennis today, with two matches going right down to the wire, only decided by third-set tiebreaks.  The first involved Victorian Isabelle Wallace who outlasted fourth-seeded Queenslander Rachel Tredoux while the other saw feisty Victorian third seed Azra Hadzic coming back from a set down to defeat a gutsy Brooke Rischbieth (SA).  Meanwhile, those watching on Court 8 witnessed another great match, with Belinda Woolcock (Vic) needing two tiebreaks to overcome Andrea Dikosavljevic (Qld).

West Australian second seed Storm Sanders showed her potential despite the conditions in her match today against Lyann Hoang (Qld). With both players content to hit it out from the baseline, Sanders always looked in control of the match taking charge of the rallies with her more powerful and consistent game.

Sanders jumped out of the blocks with an early break to take a 3-0 lead before Hoang held serve after a struggle to get herself on the scoreboard. After that, both players continued to trade blows from the baseline with Sanders holding on to that early break to win the first set 6-3.

Hoang came out to start the second set a little more fired up and it paid off with an early break. But Sanders lifted her intensity to immediately break back. That started a string of breaks with both players making a number of unforced errors. However, at 3-3, Sanders again lifted, and took the last three games of the match for a comfortable 6-3 6-3 victory.

After the match, Sanders spoke of the nerves that sometimes come with a first-round encounter but said she felt she had played a solid match.

“In the second set maybe I dropped my focus a little bit but then I managed to regain myself and play well,” she said.

On her opportunities during the 2011 December Showdown and beyond, Sanders said she was just concentrating on taking it one match at a time. “If I just keep playing well, good results will happen.”

In other girls’ results today, Victorians Viktorija Rajicic (No.5) and Ashley Keir (No.7) both won their matches in straight sets against Alexandra Nancarrow (ACT) and Eliza Long (Vic) respectively.  Meanwhile, Ebony Panoho, the eighth seed from Queensland, survived a three-set encounter with Michaela Capannolo (Vic).